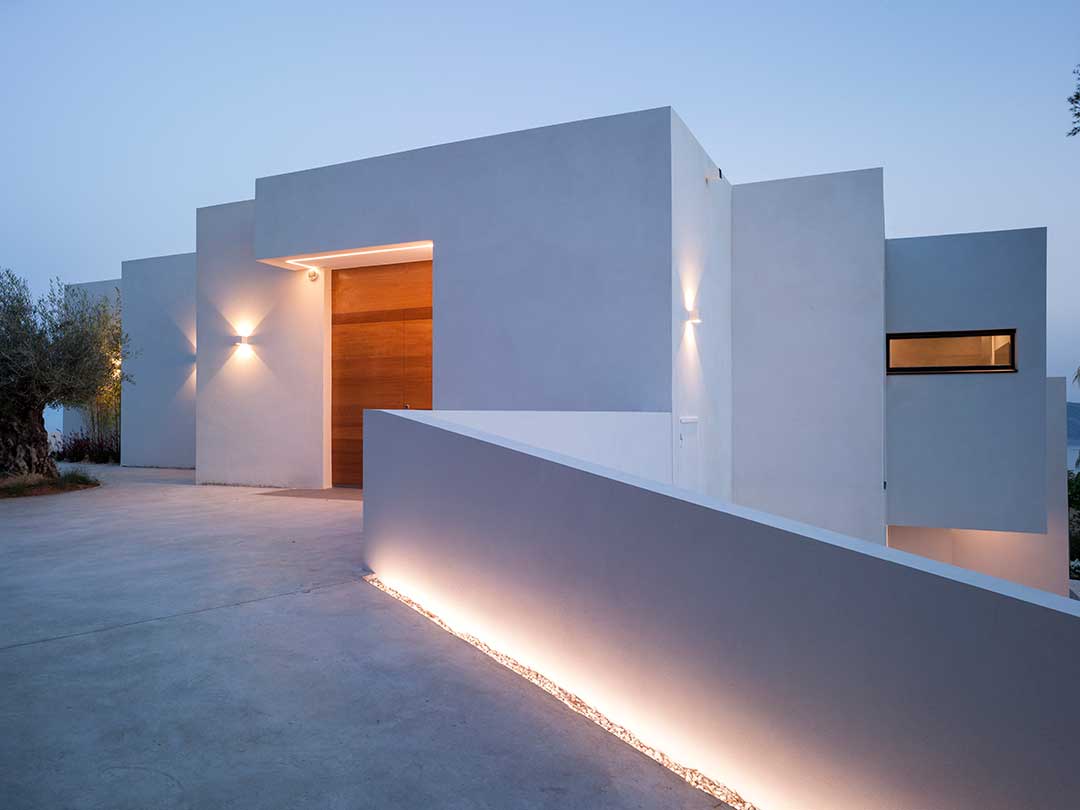 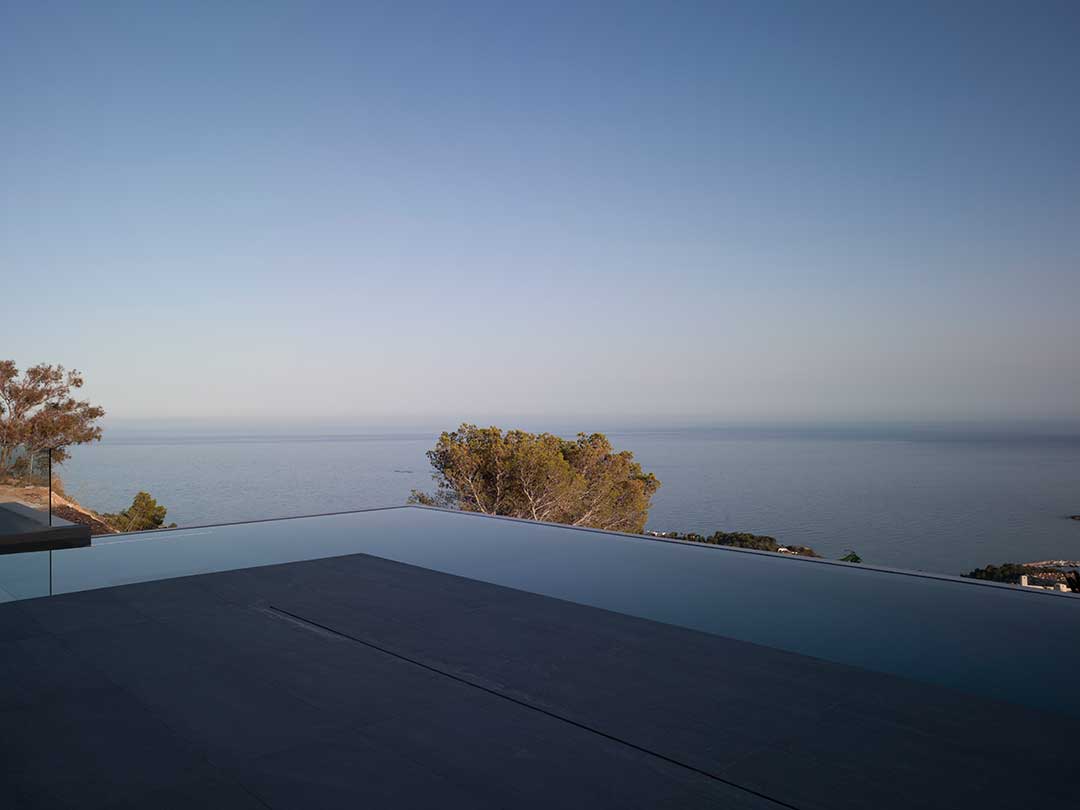 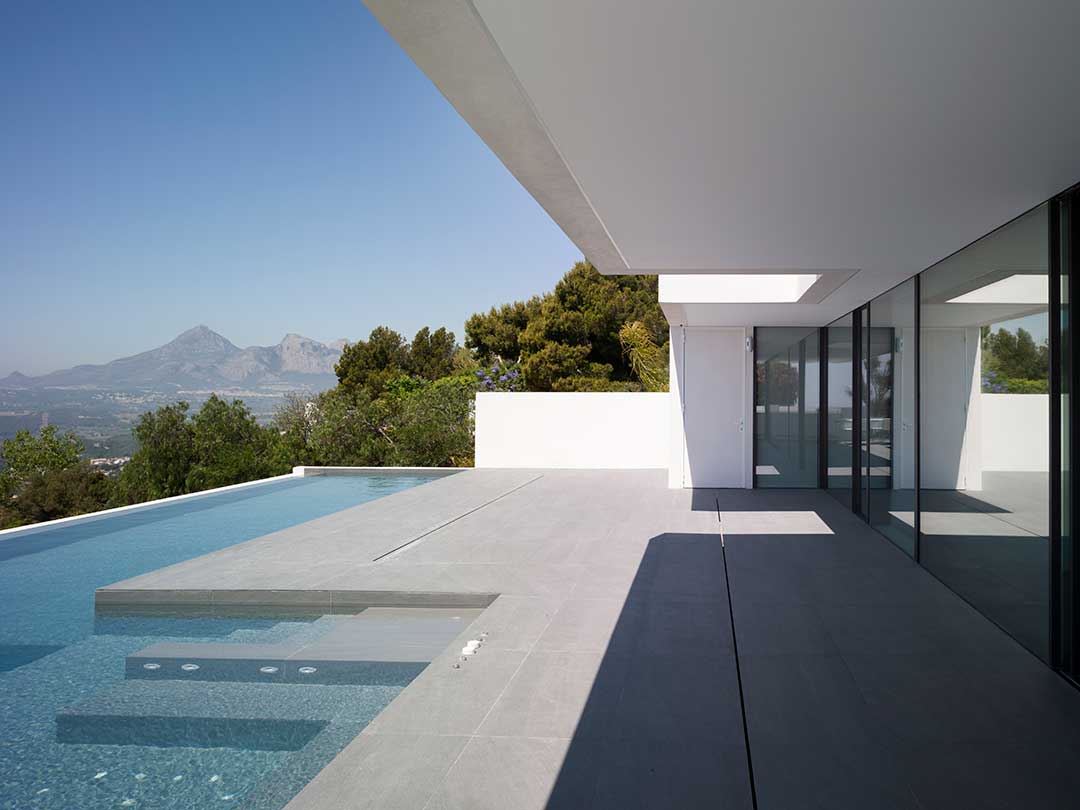 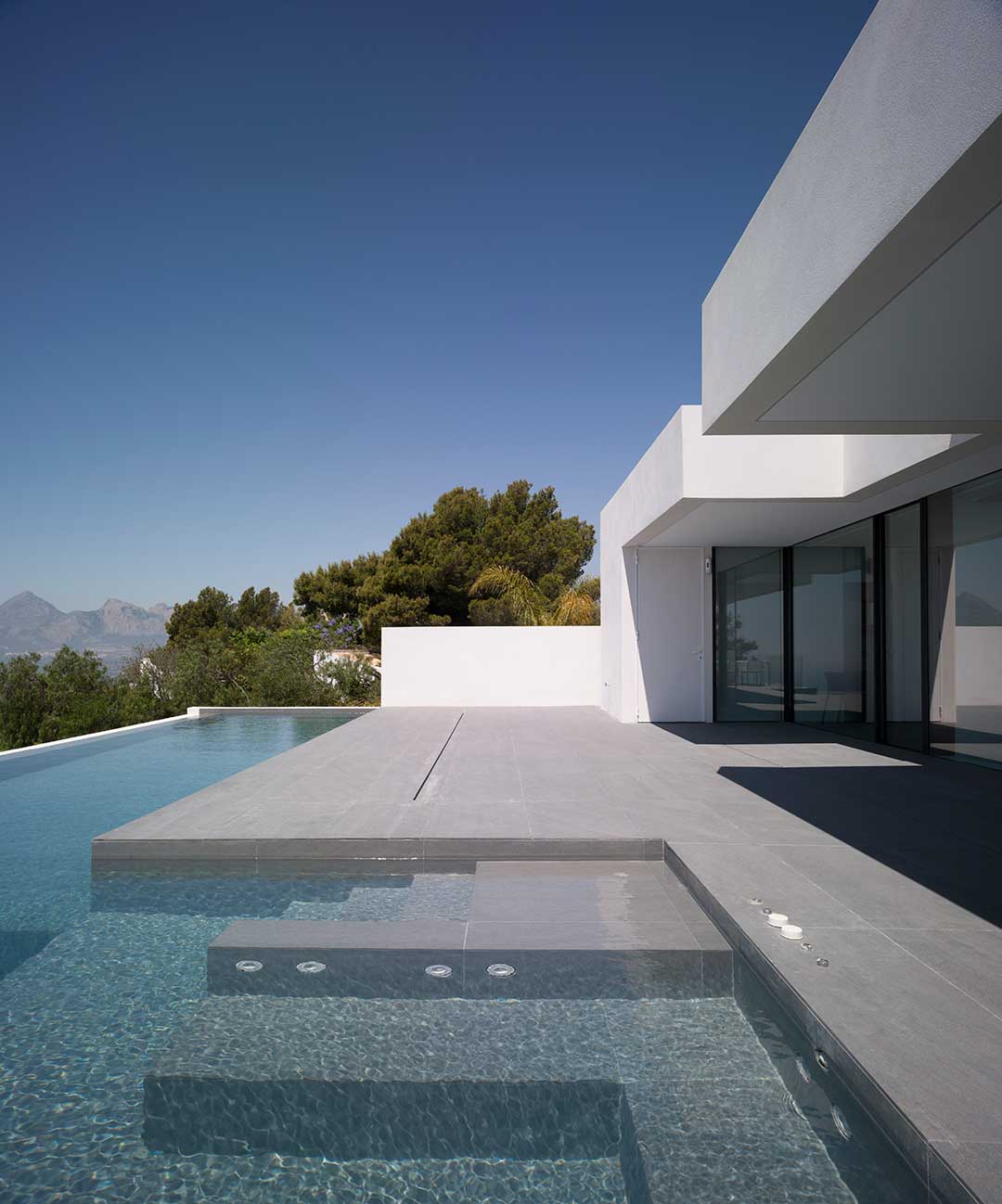 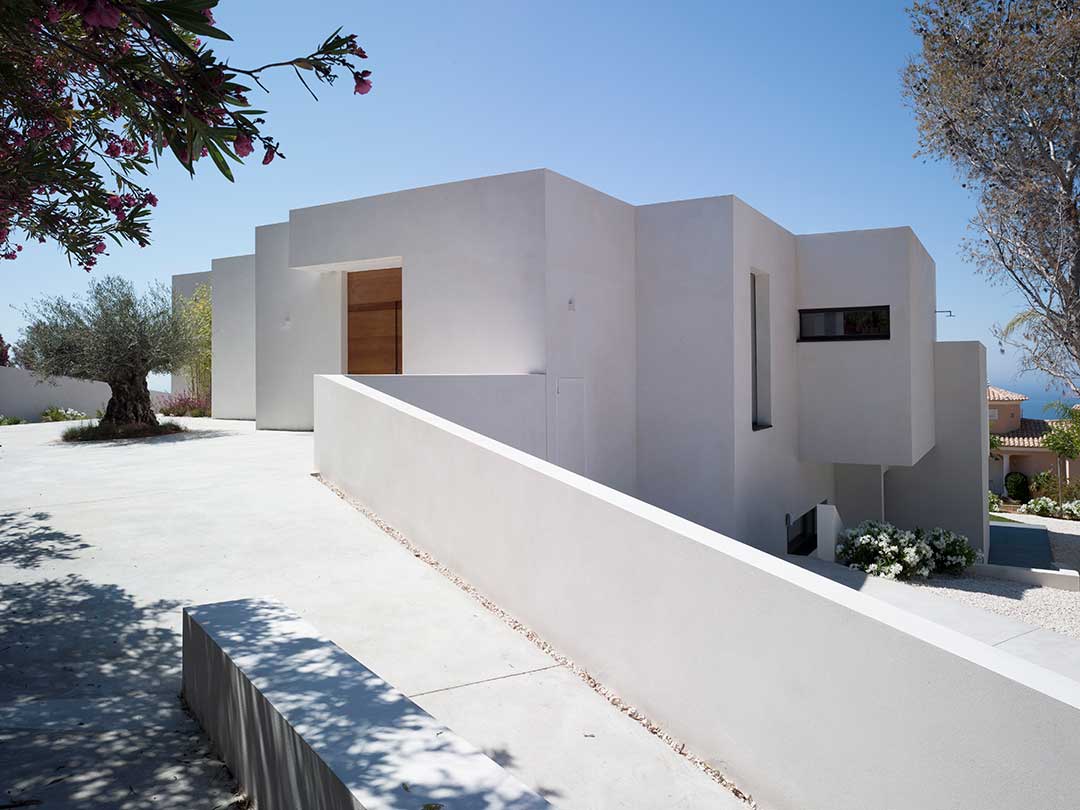 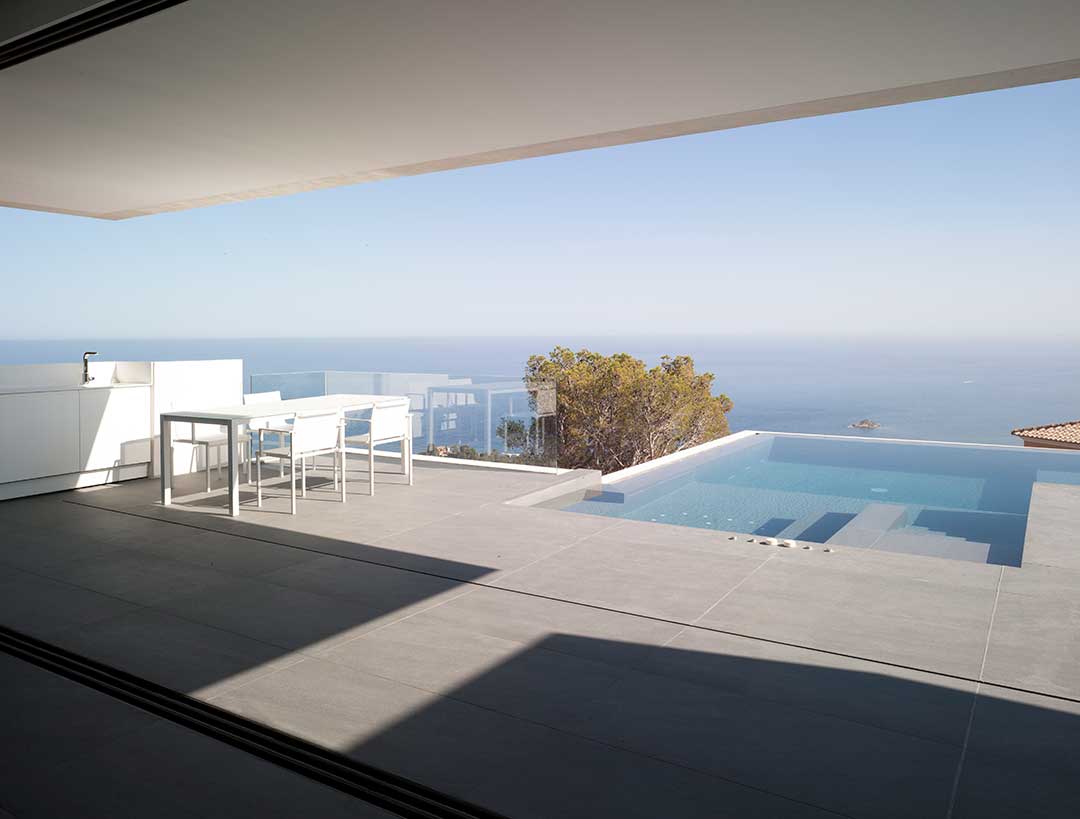 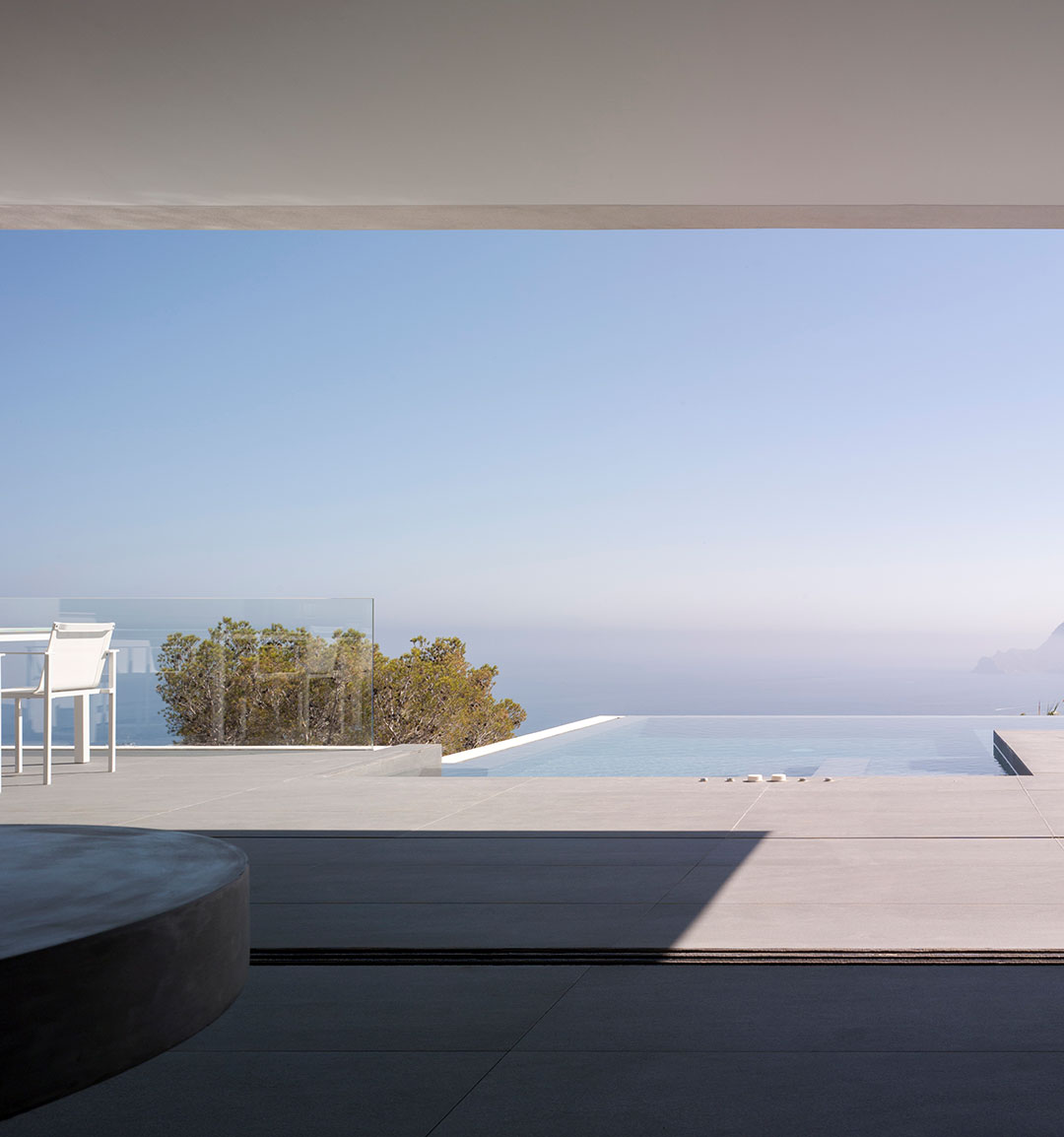 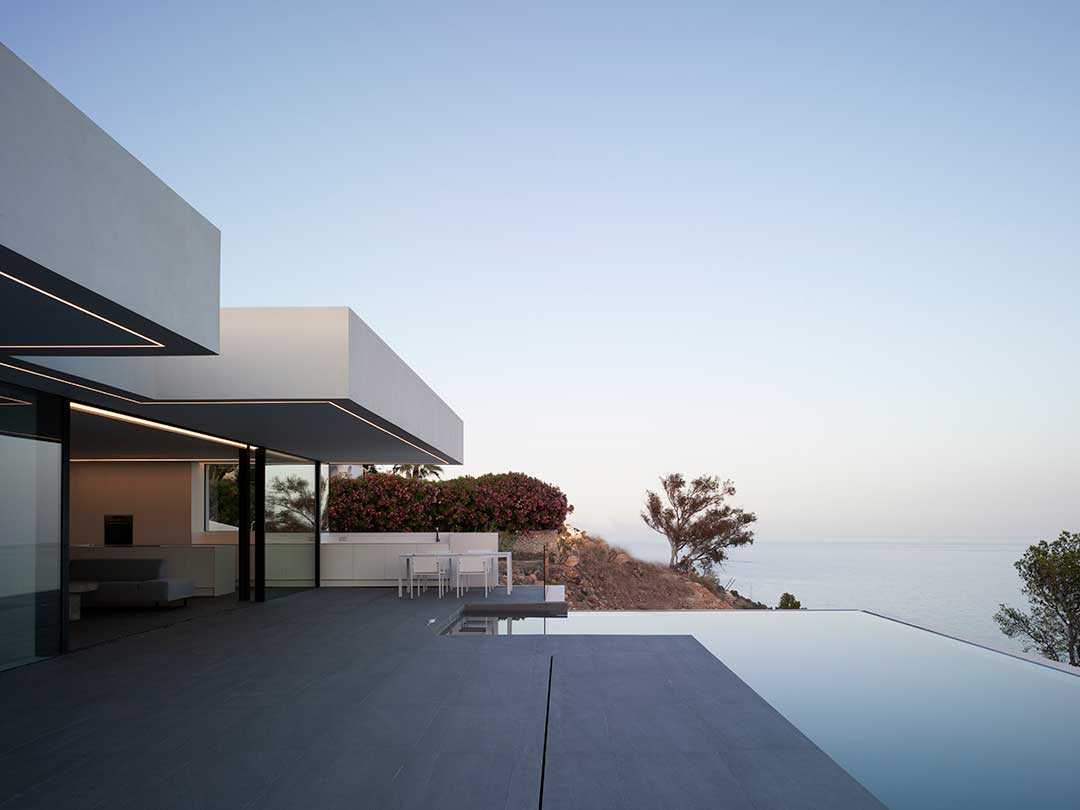 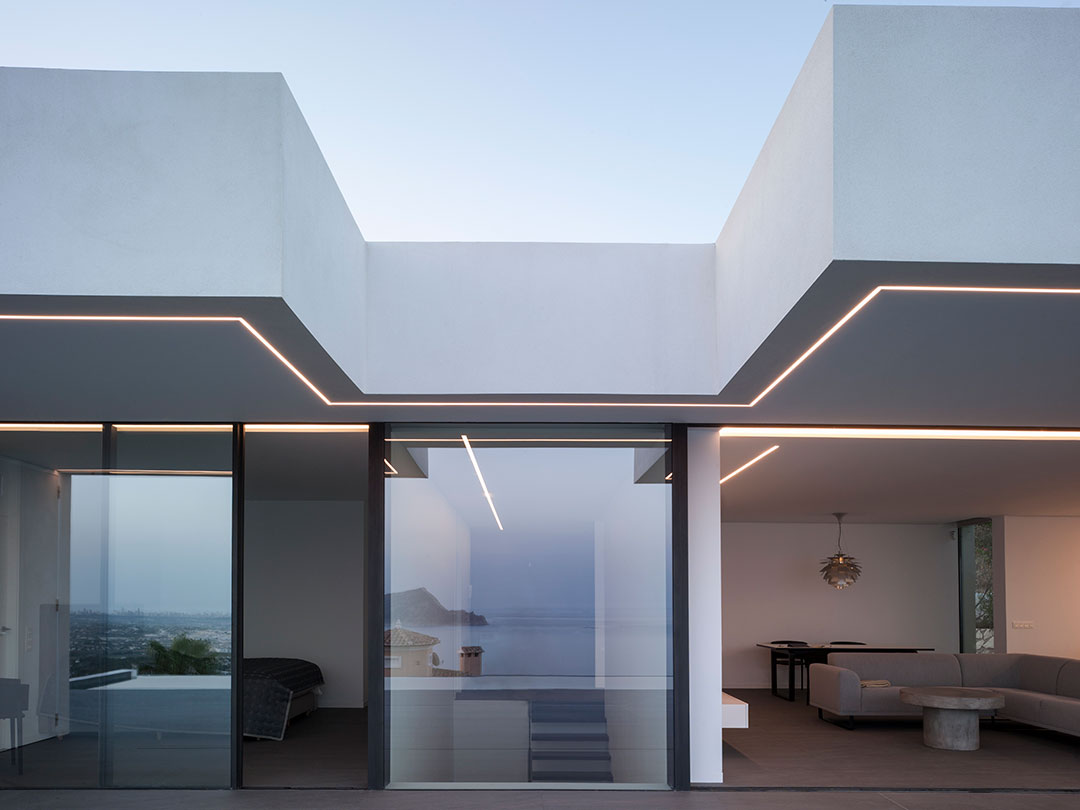 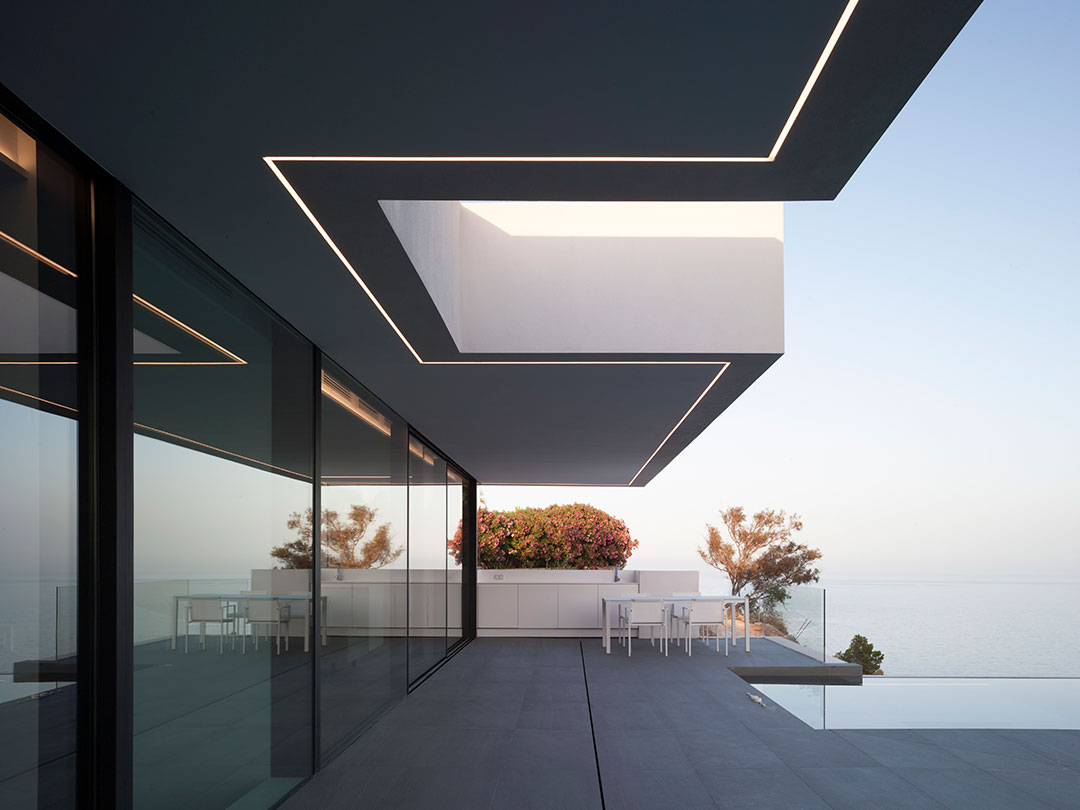 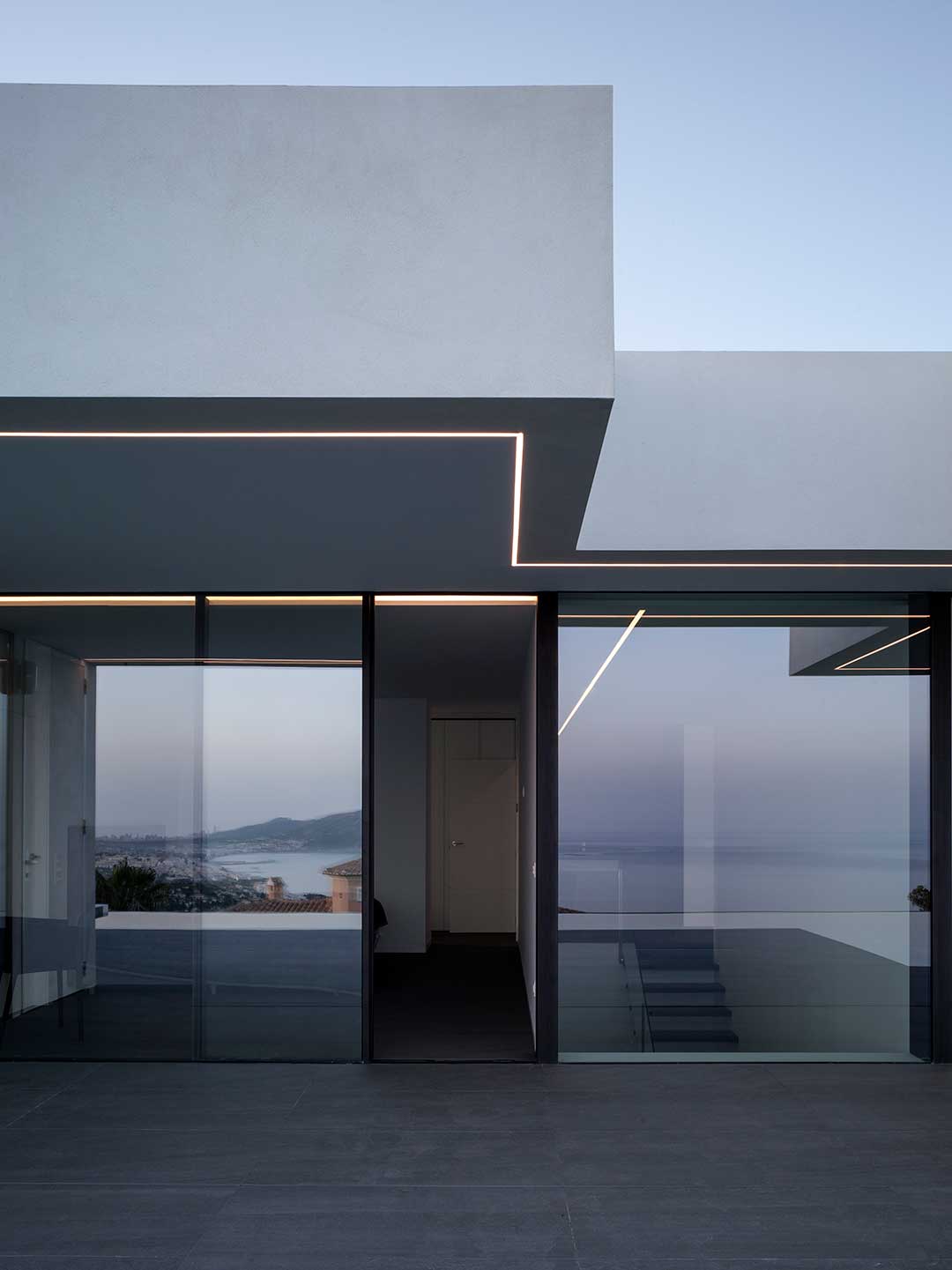 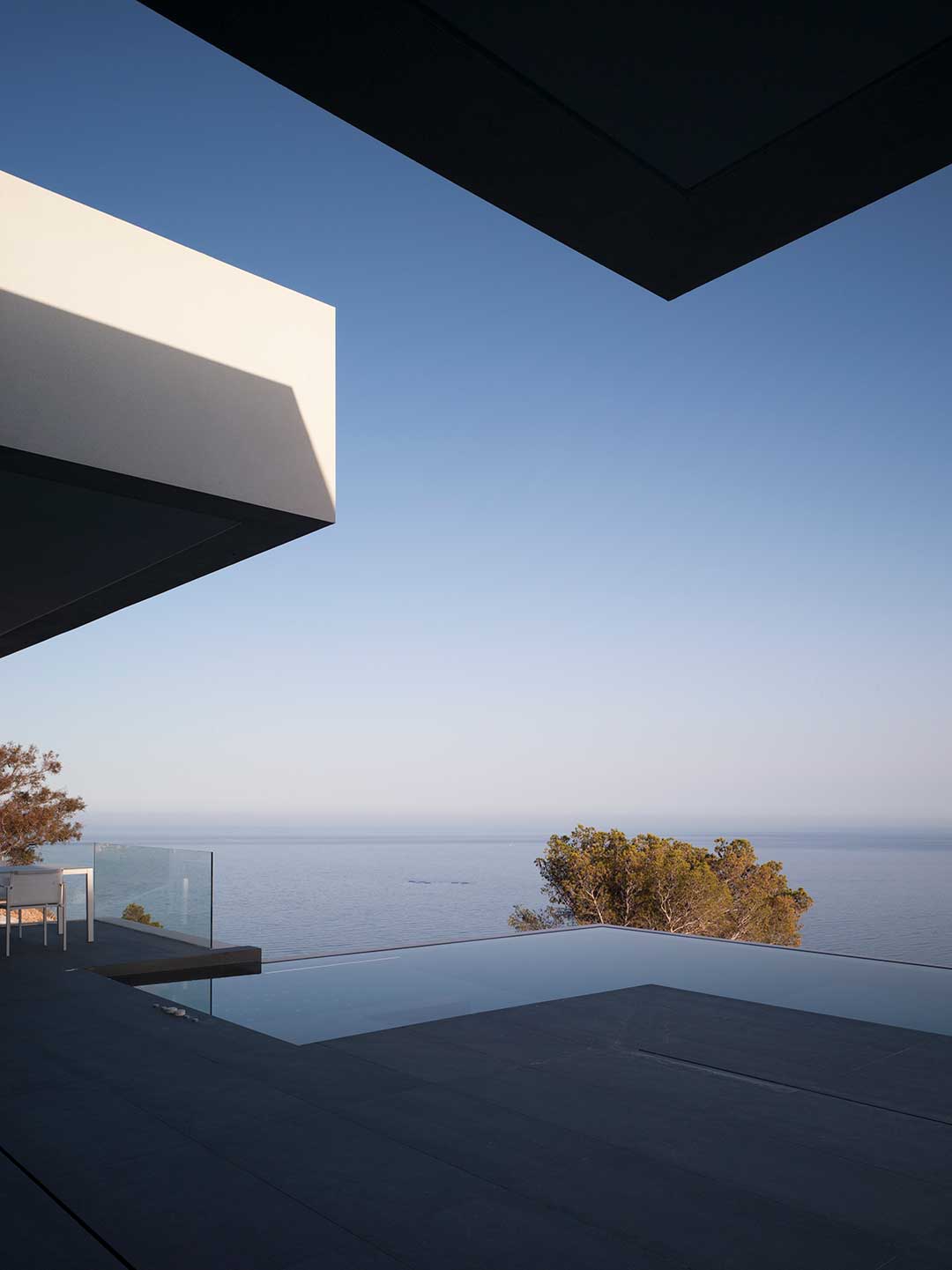 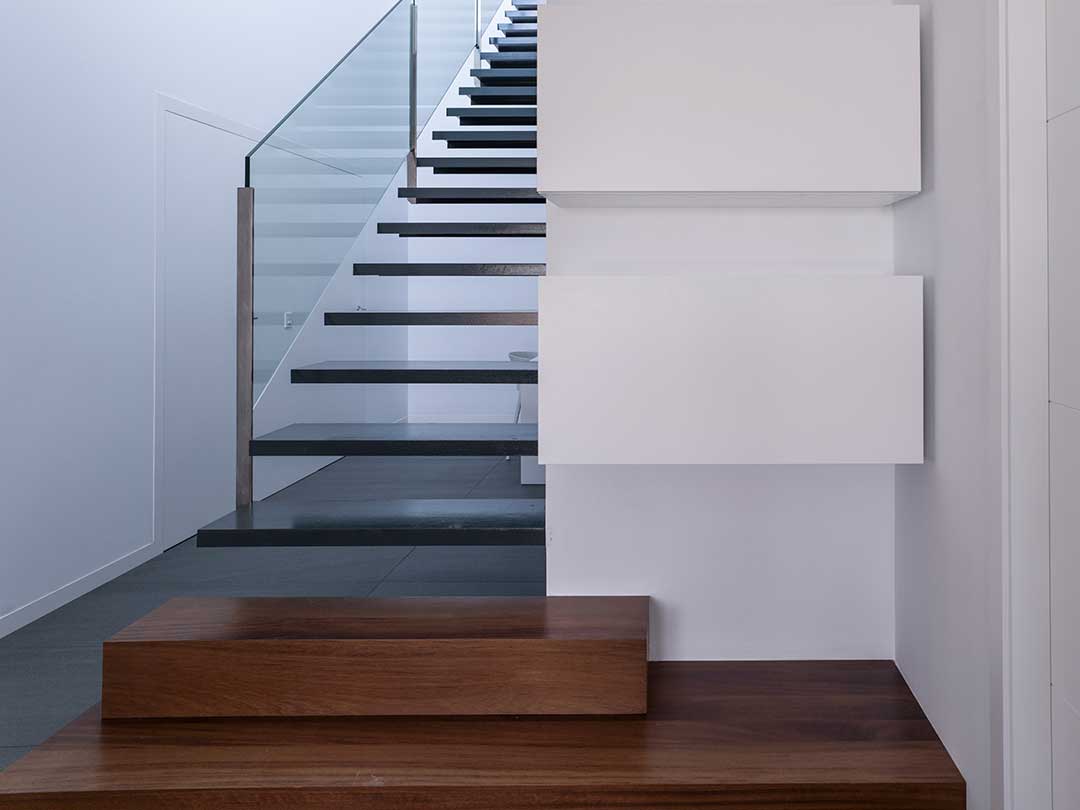 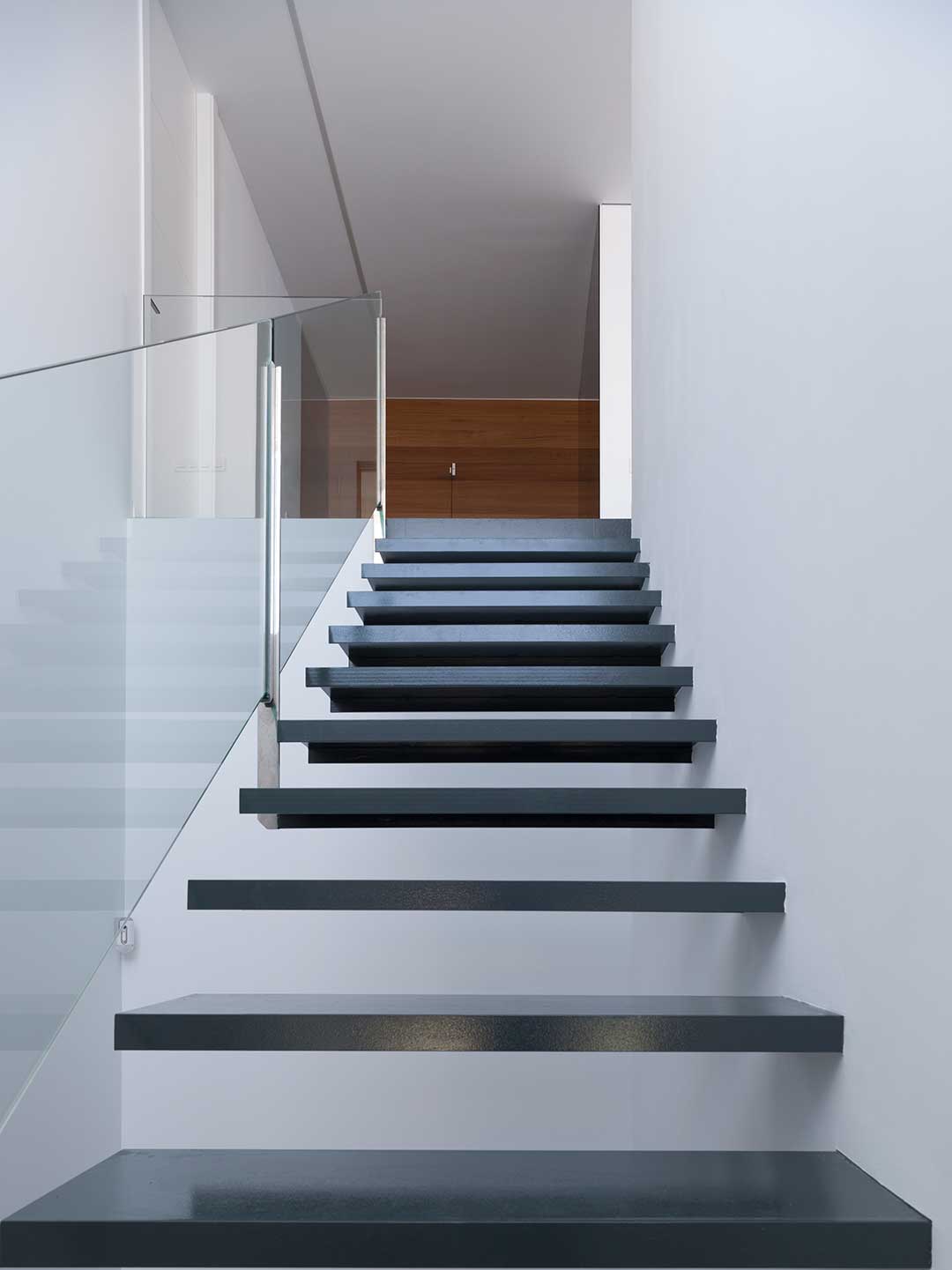 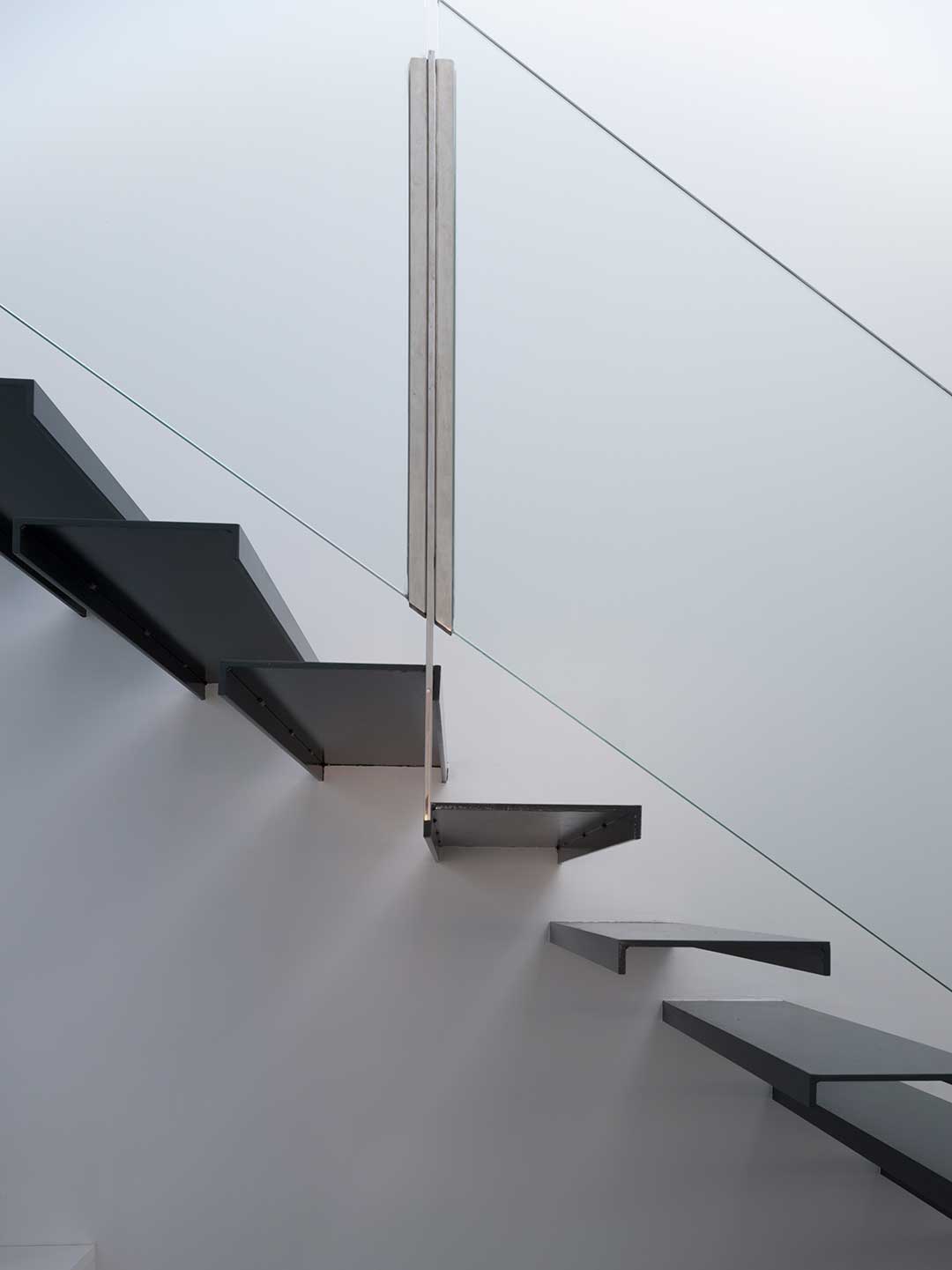 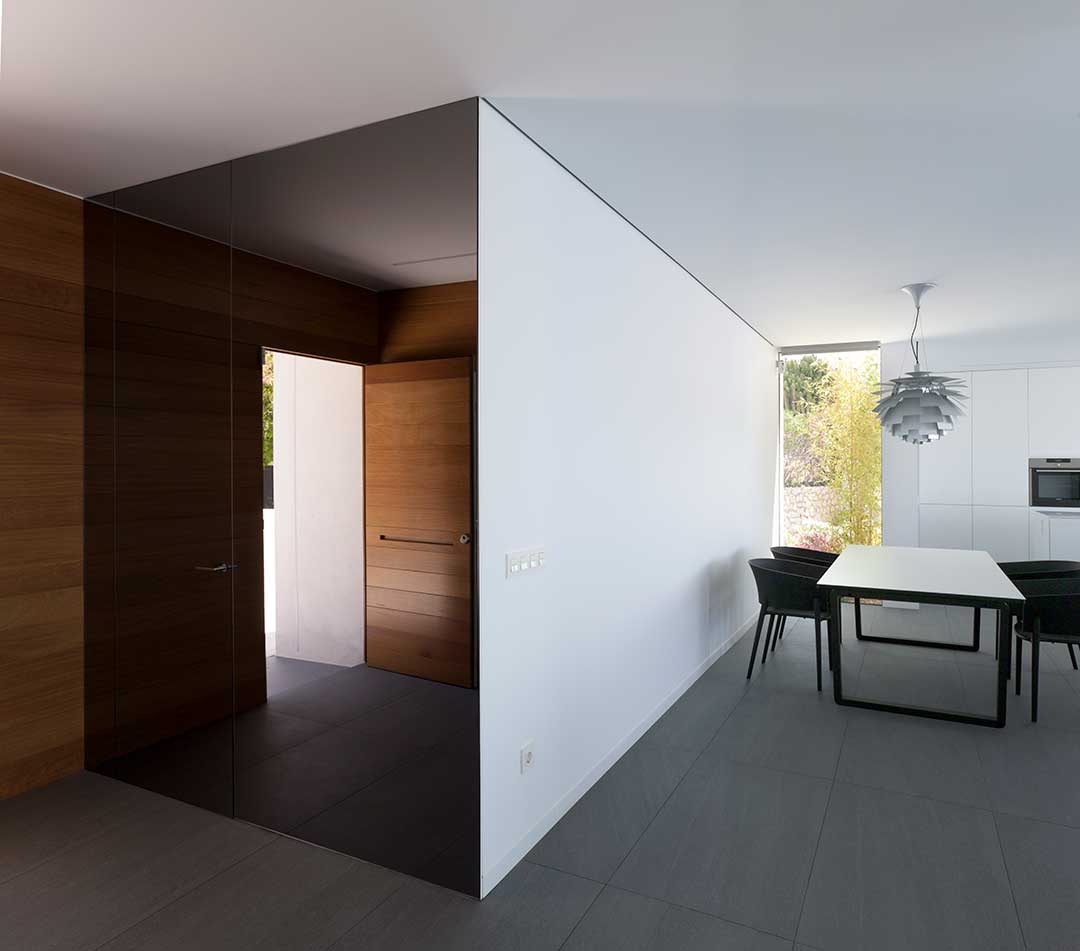 When we tackled this project, we tried to optimize what we consider to be priority: the views. In this regard, we had to consider several conditions: the slope of the plot did not match the direction of the best views, the existence of a house with a large dome in the front plot would hinder part of the vision, and the future existence of another housing in the neighboring plot would not allow such a wide set of views, mainly towards the sea. It was then decided to study which views would leave the neighboring house free and orient our house towards the South, looking directly towards the tip of Albir, reference mountain in the area, trying to overcome the vision on the aforementioned dome. (With this it would be possible to have views to both the sea, the historic center of Altea and the “skyline” of Benidorm).

In order to have the best possible view from the day zone, the strategy was to reverse the normal layout of the pieces: the living-dining-kitchen and the master bedroom are arranged at first height along with the terrace and pool, which flies over the rooms, located on ground floor, in addition to a small living room and other secondary units.

In this way it was also possible that the building adapted to the slope of the mountain, not as pronounced as in the adjacent plots. The result is a dwelling with two well-differentiated faces: a more closed, with North orientation, that plays to teach the differentiation of massive volumes, and one that opens completely to the views and the South orientation, which forced to realize cantilevers that allow to protect the house from the sun, while giving it the aesthetic result sought, since they bring lightness and dynamism to the whole, since that protection in the form of a cantilever is not continuous, but fragments by differentiating and dividing the living-dining-kitchen area with respect to the main room, these spaces being separated by the stairs.

In terms of materiality, the house is presented as a white rotunda piece, characteristic color of this area of ​​the Mediterranean, which contrasts with the gray anthracite of metallic carpentry and other complementary elements. Between these two colors (which will constitute the chromatic base of the house), the floor is located, offering a dark gray tone that due to the presence of the sun for practically the whole day is perceived as more clear. This pavement materializes both inside and outside, even in the pool, so that you get the continuity you want when you want to relate these two areas of the house. Inside, the space that connects the access with vertical communication stands out, since the staircase is developed in metallic pieces flown very light, that also share space with a space to double height, which is able to relate visually the entrance of the house both with views of the landscape straight, as with the small living room on the ground floor diagonally.

The use of artificial light serves to highlight the volumes on the north face and on the contrary to frame the cantilever planes on the South side, in addition to achieving a great dynamism and continuity given the use mainly of linear luminaires.