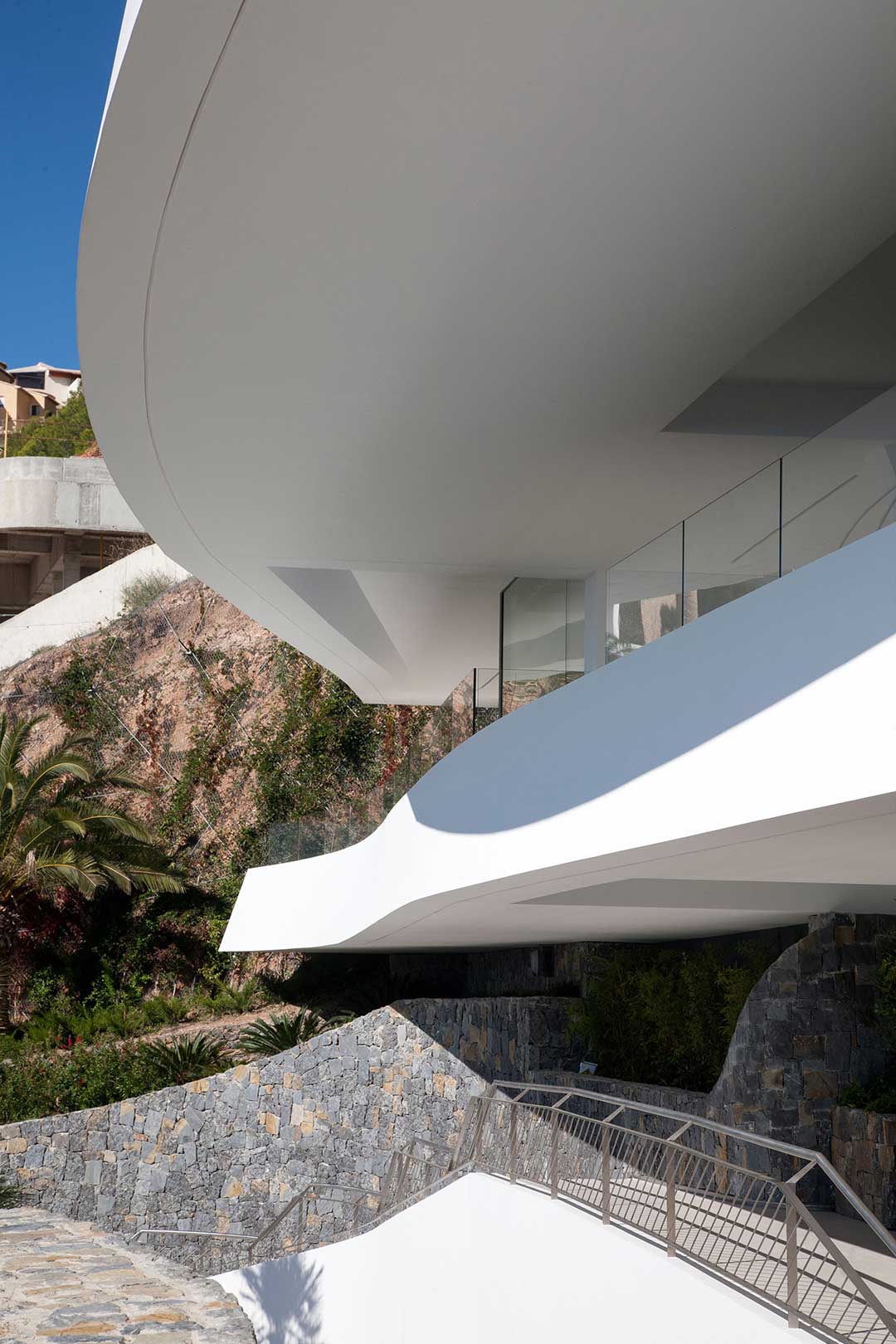 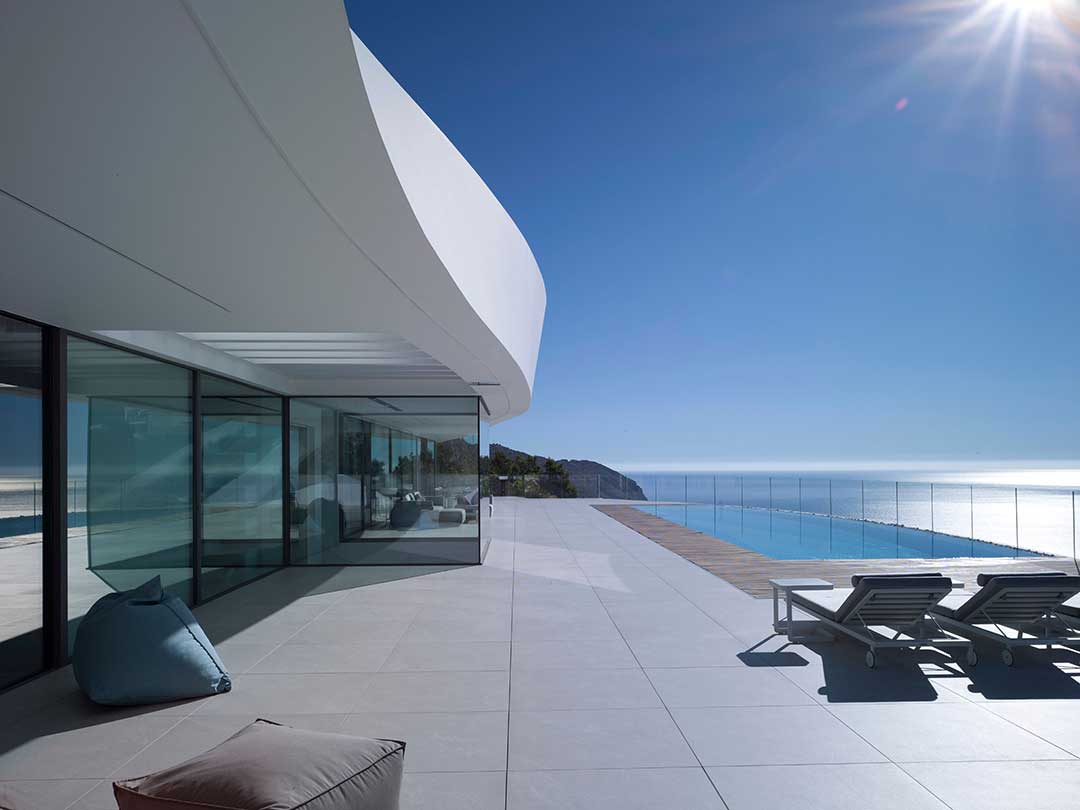 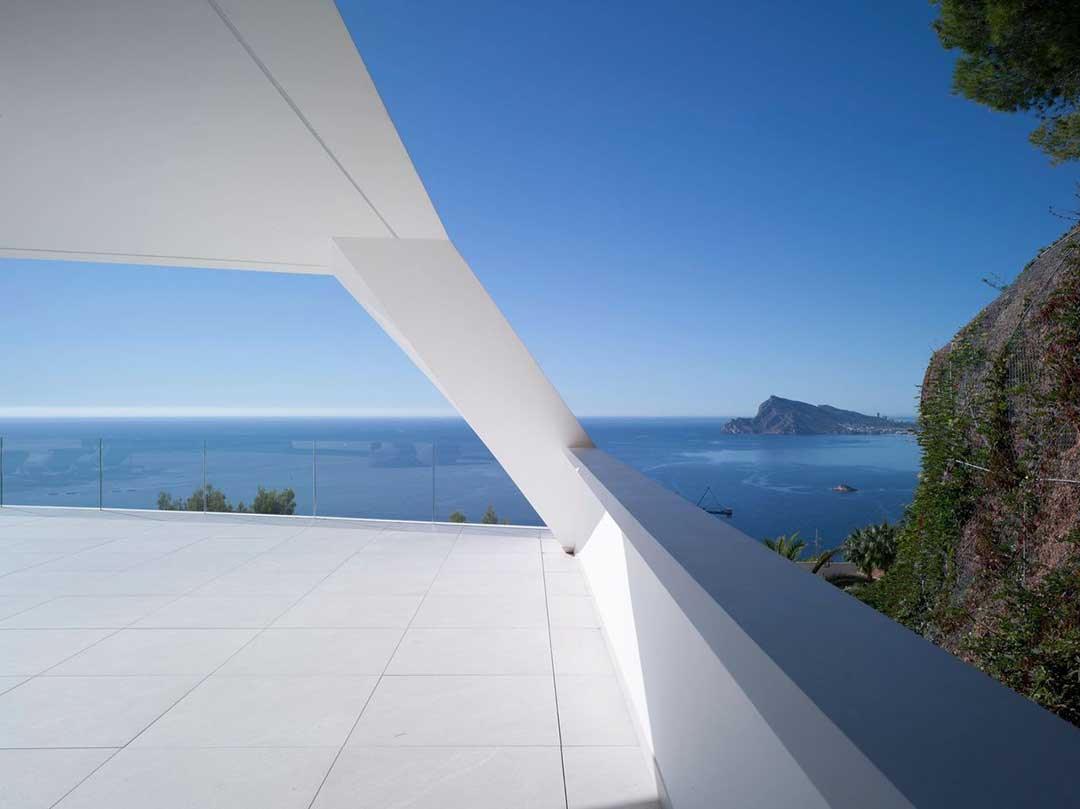 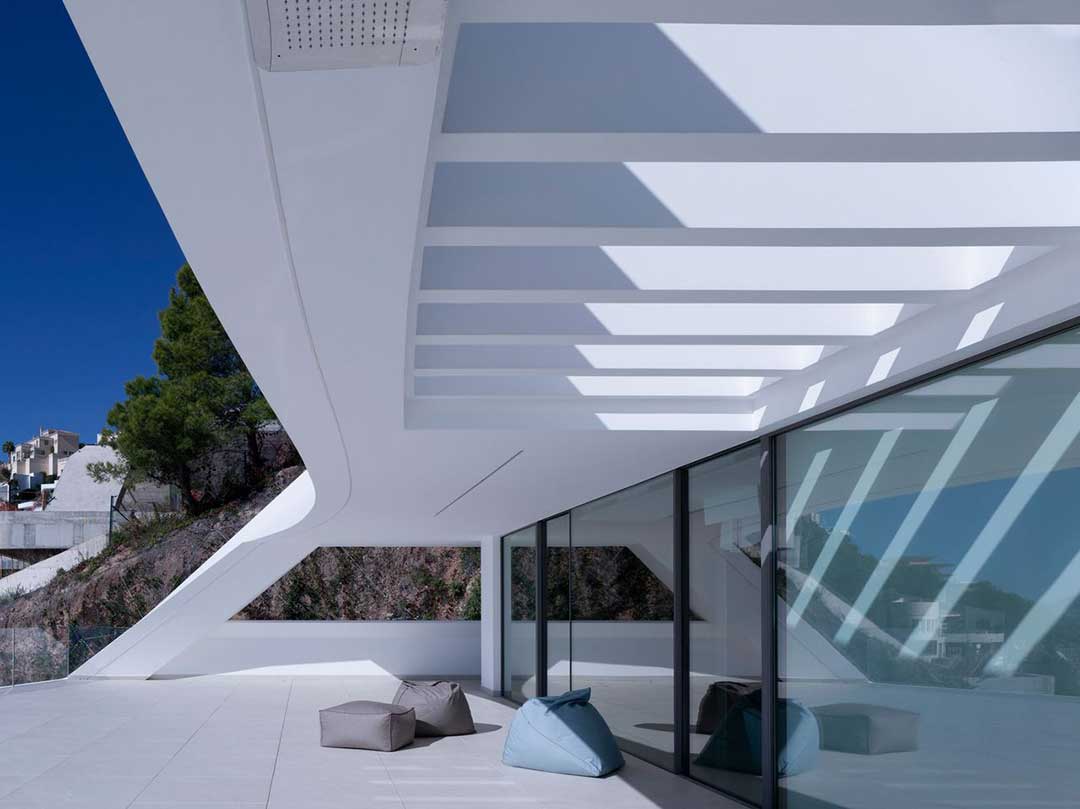 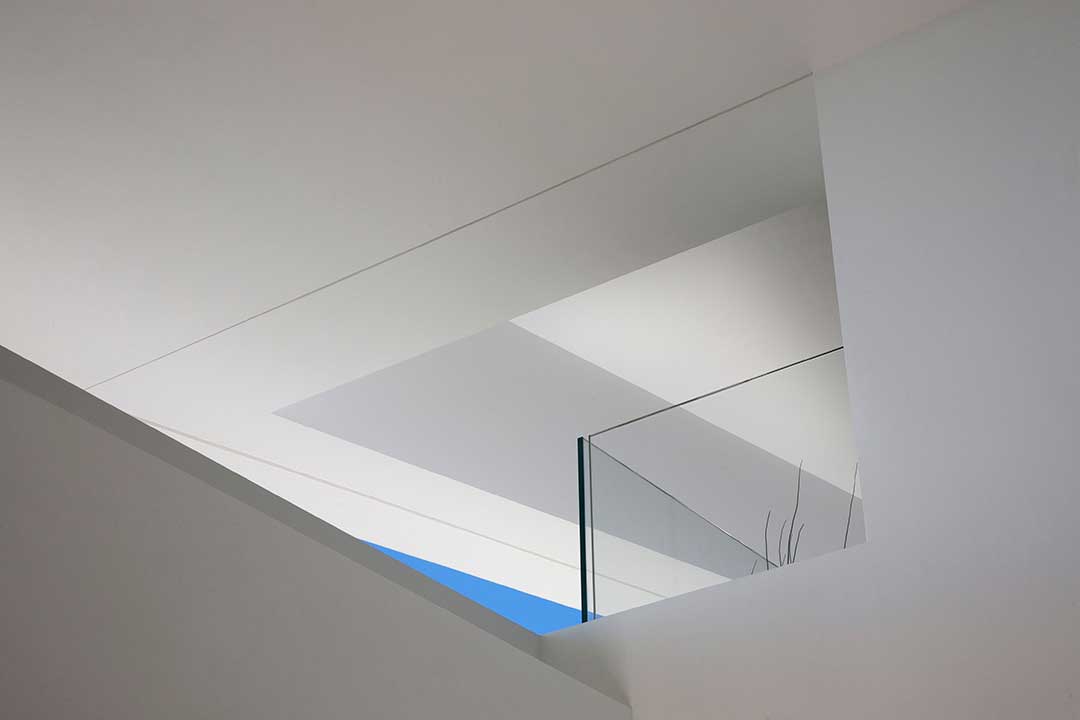 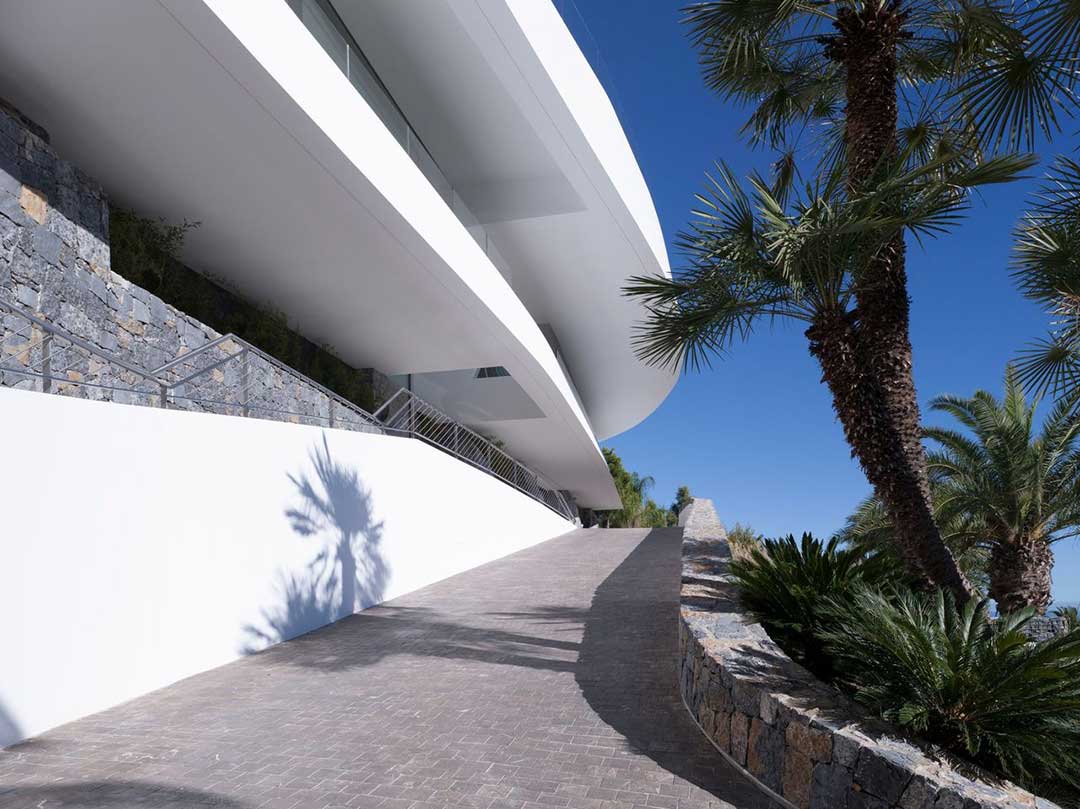 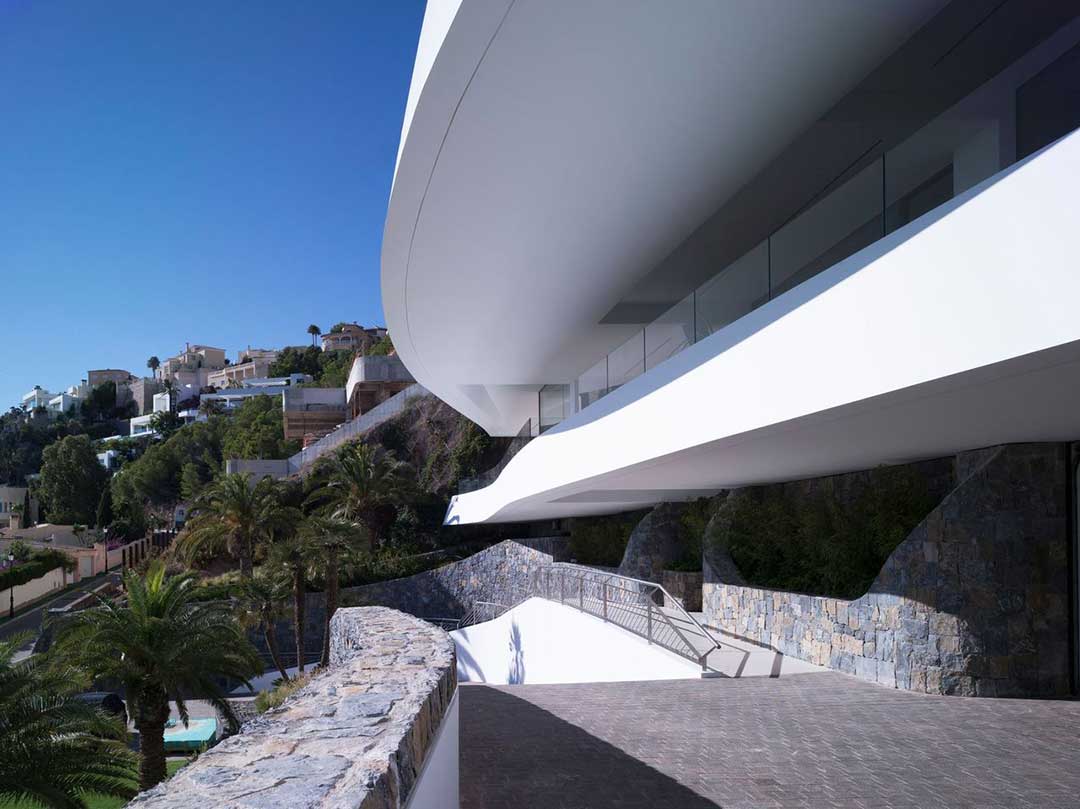 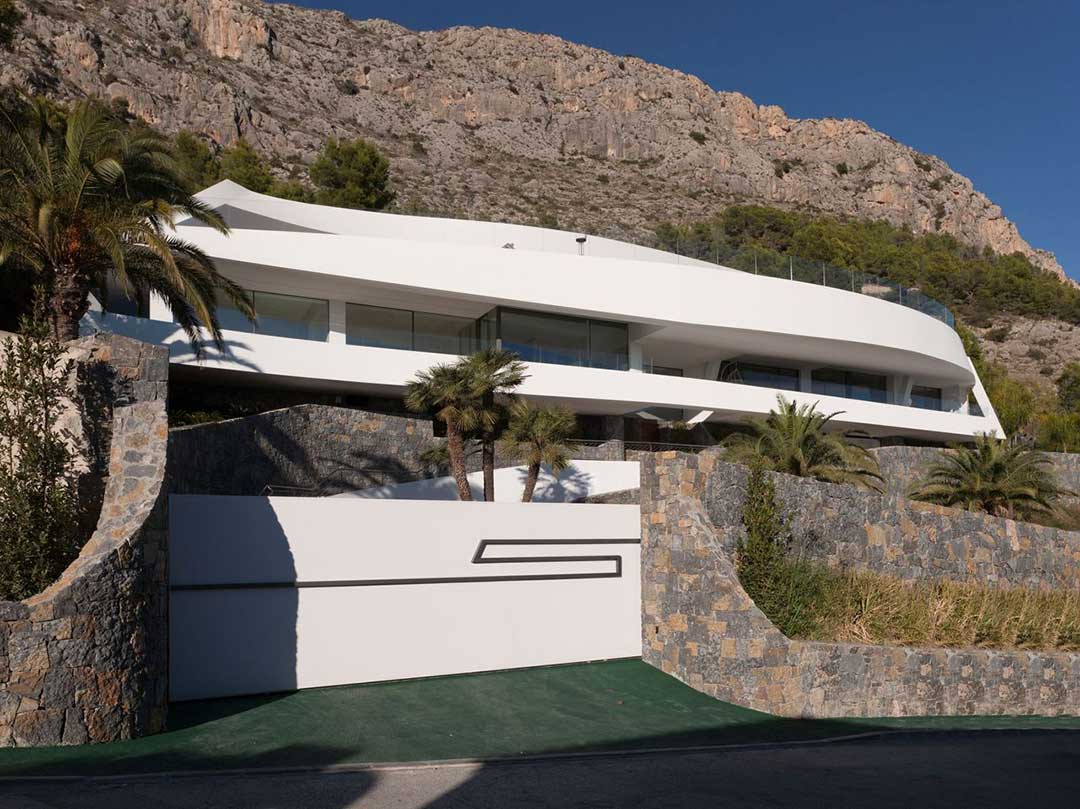 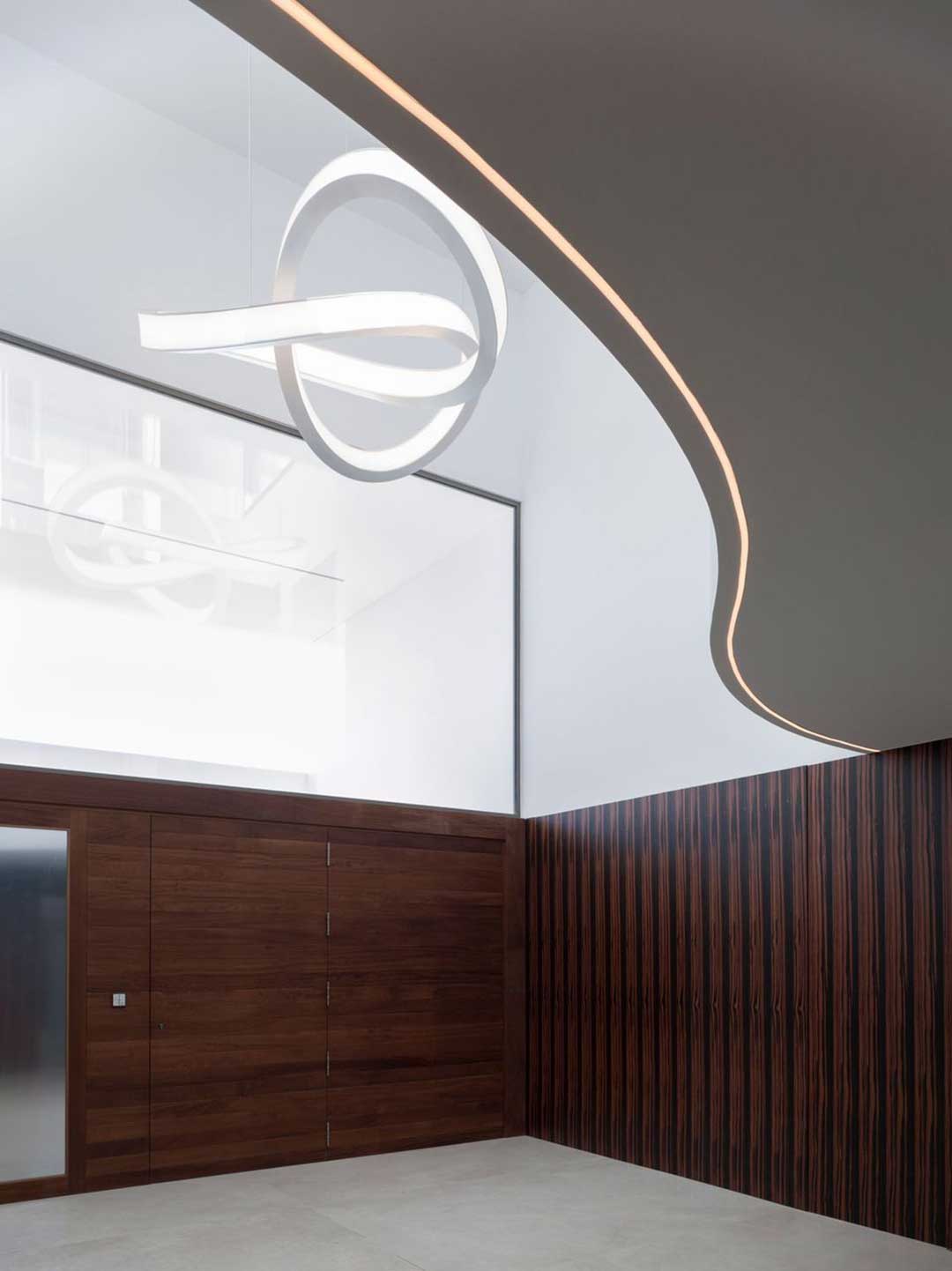 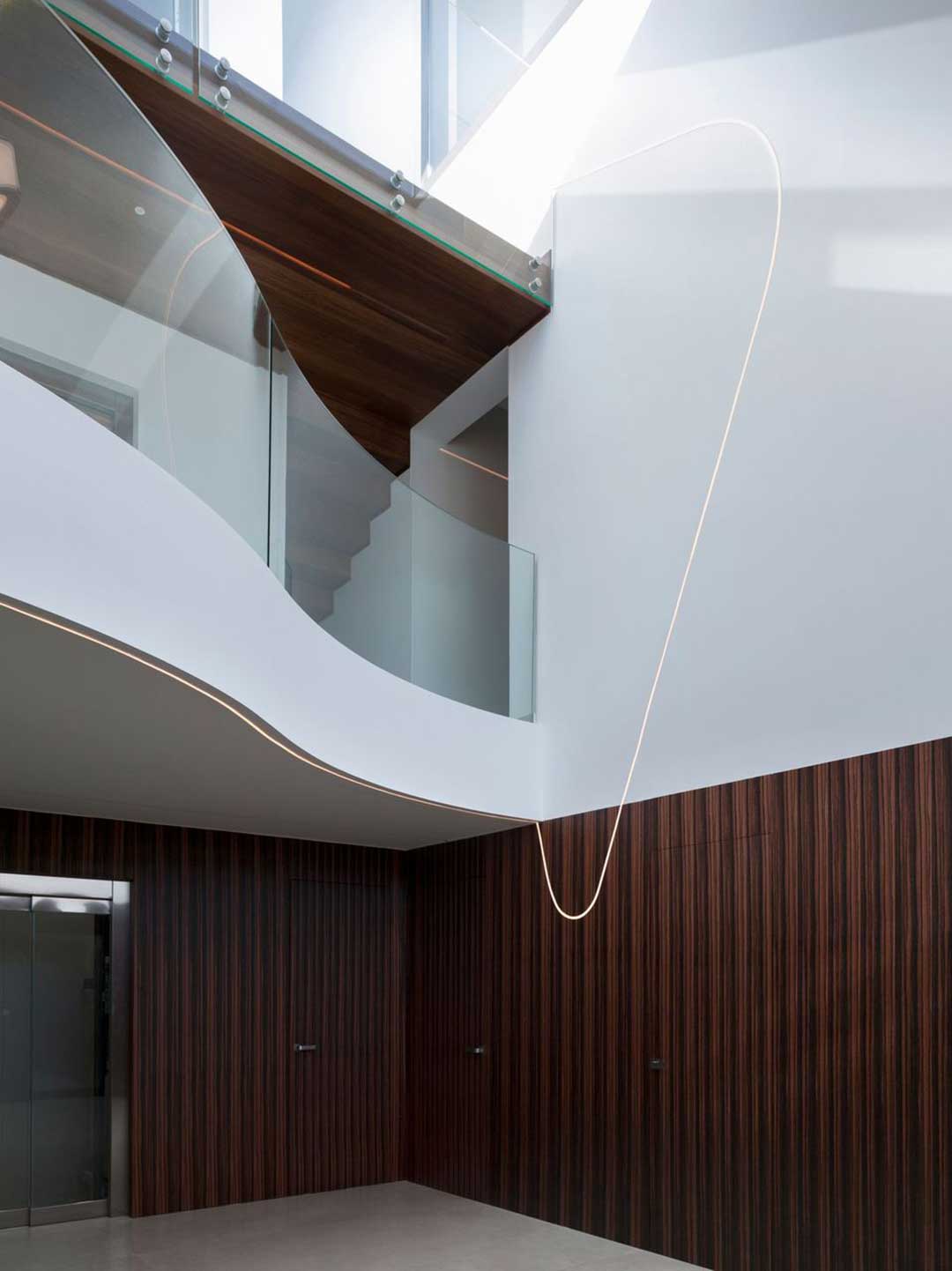 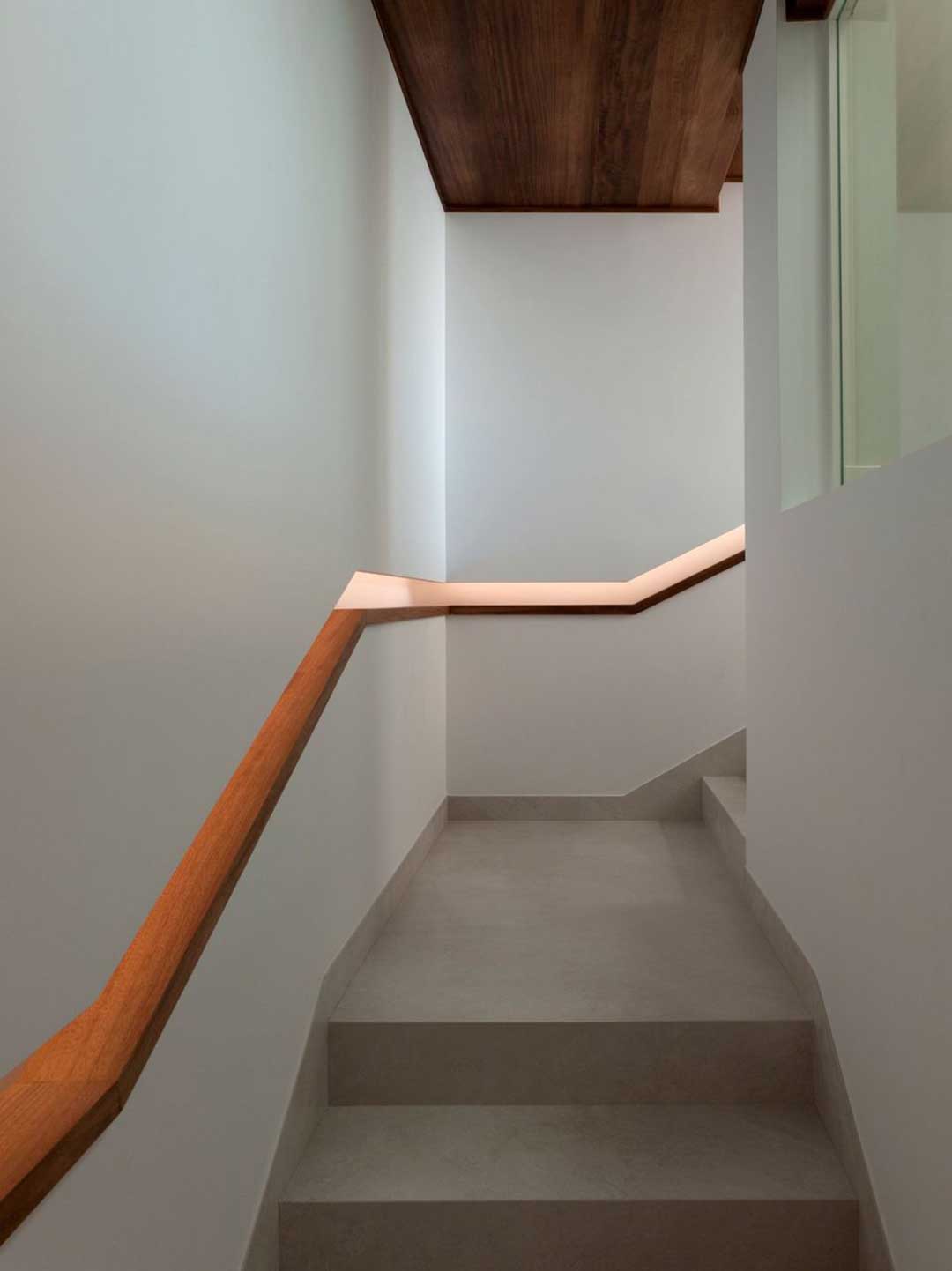 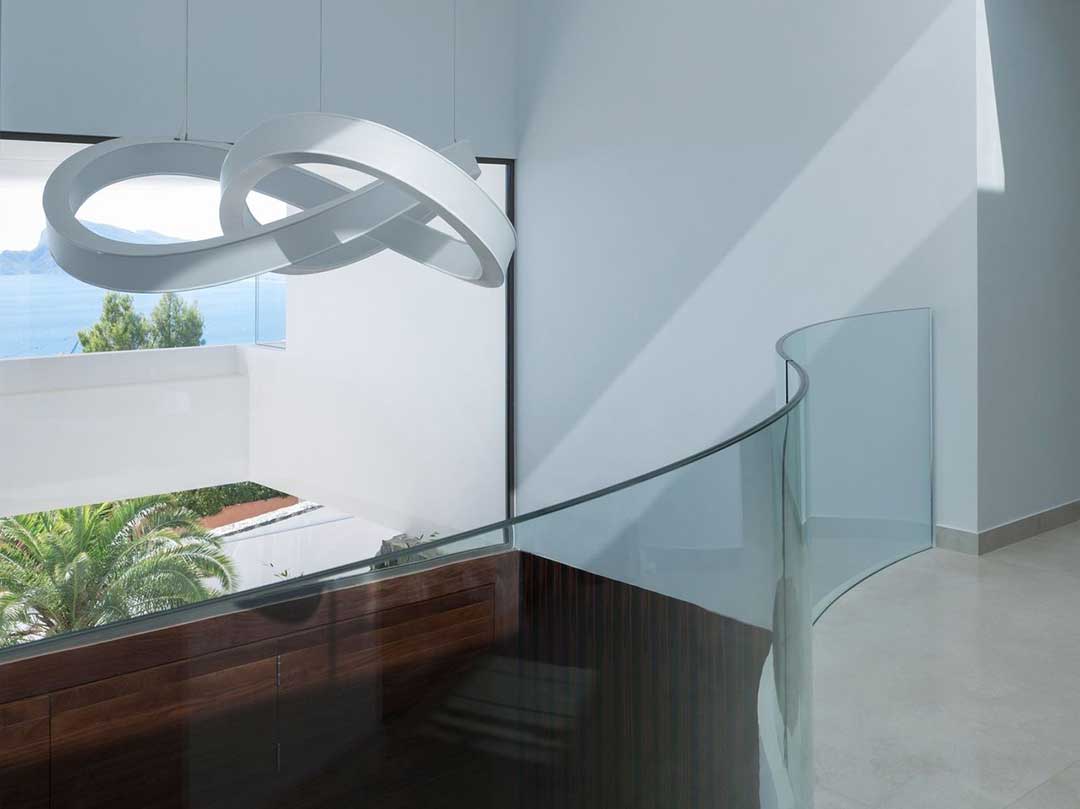 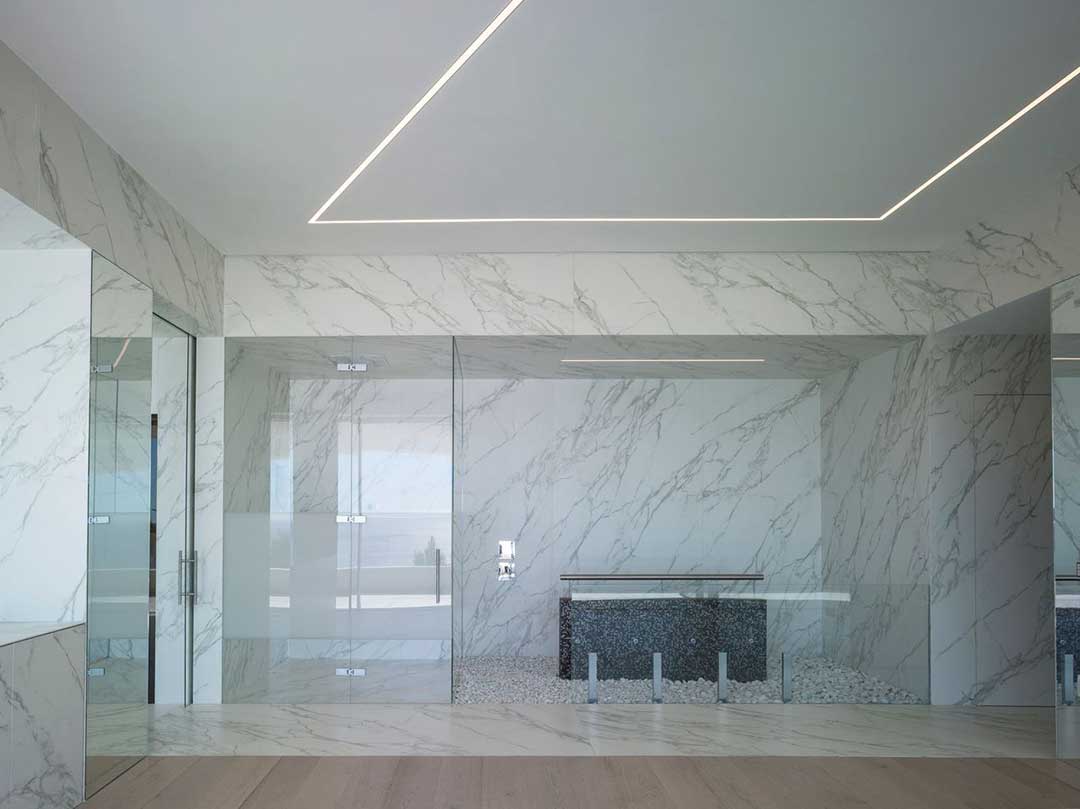 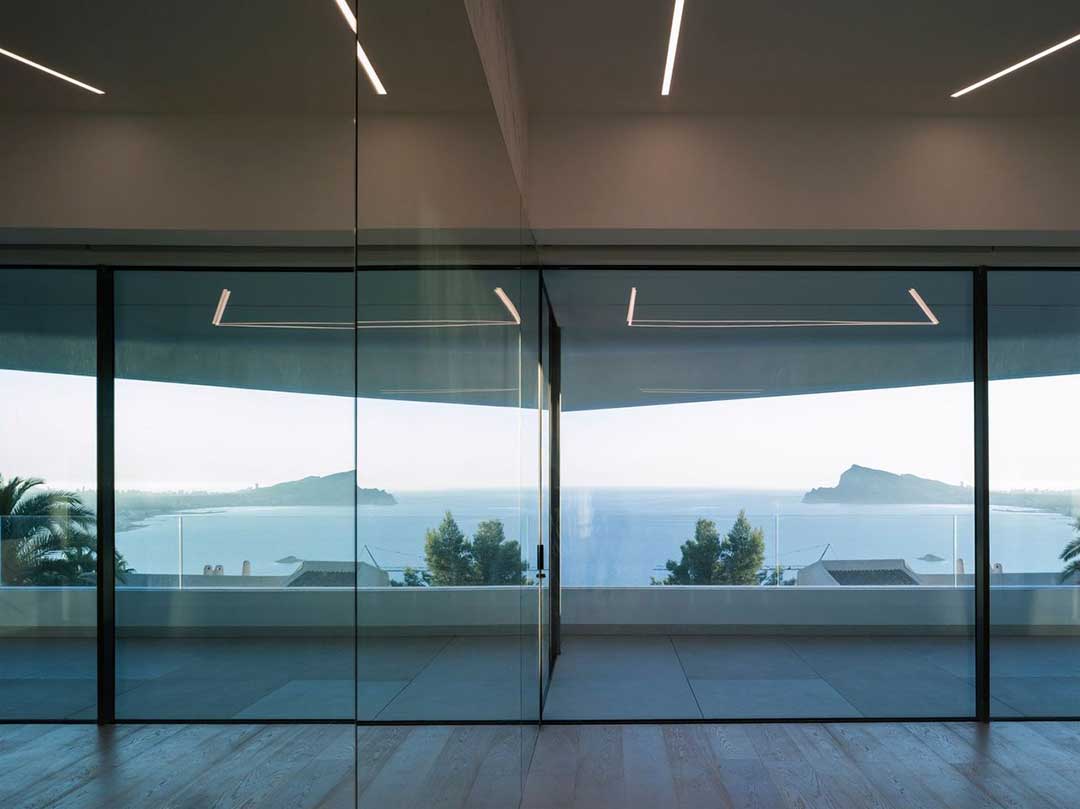 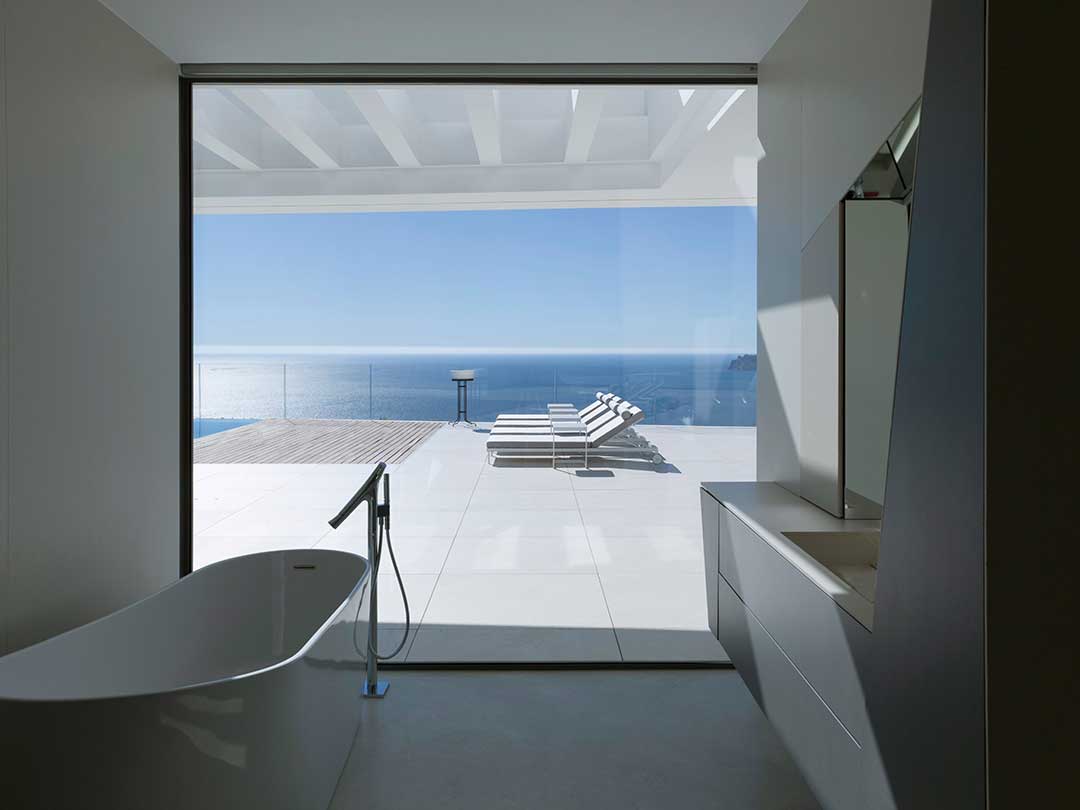 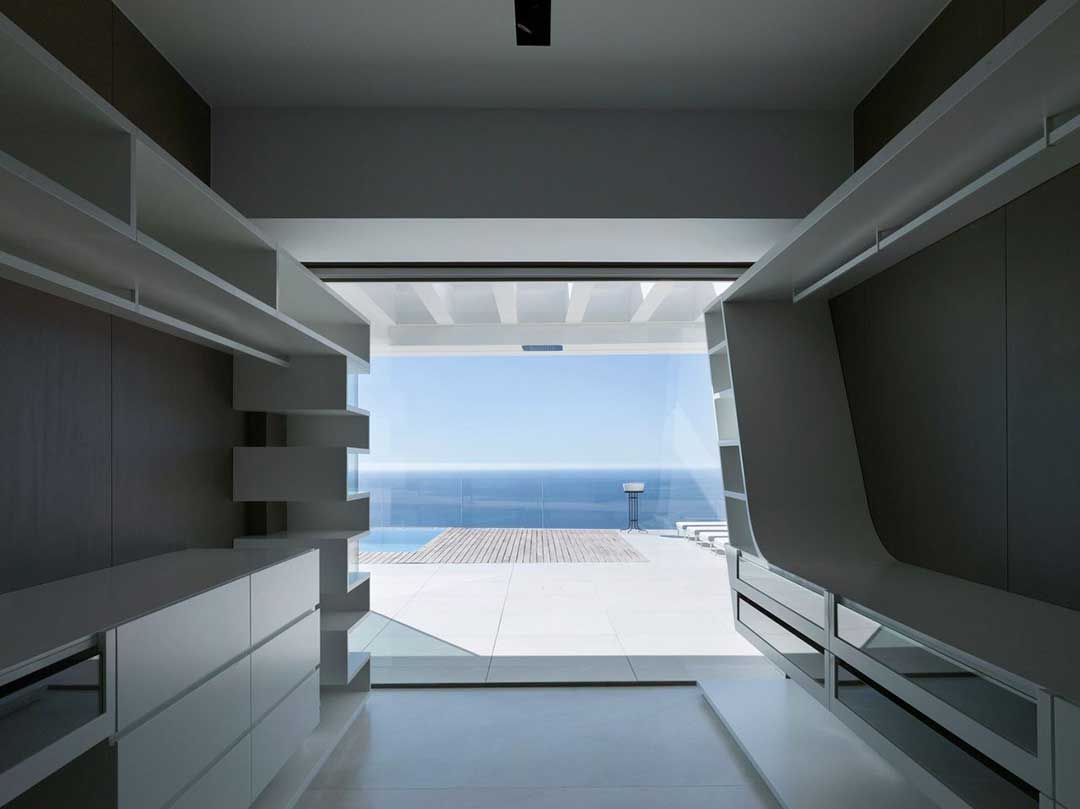 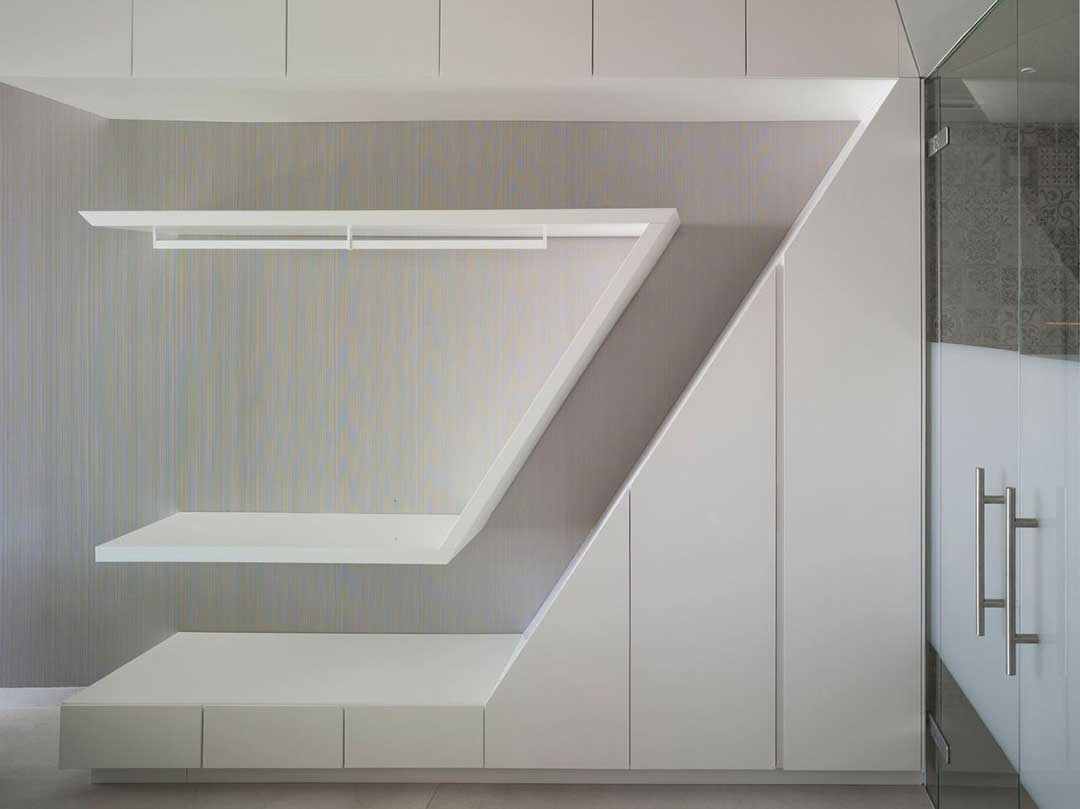 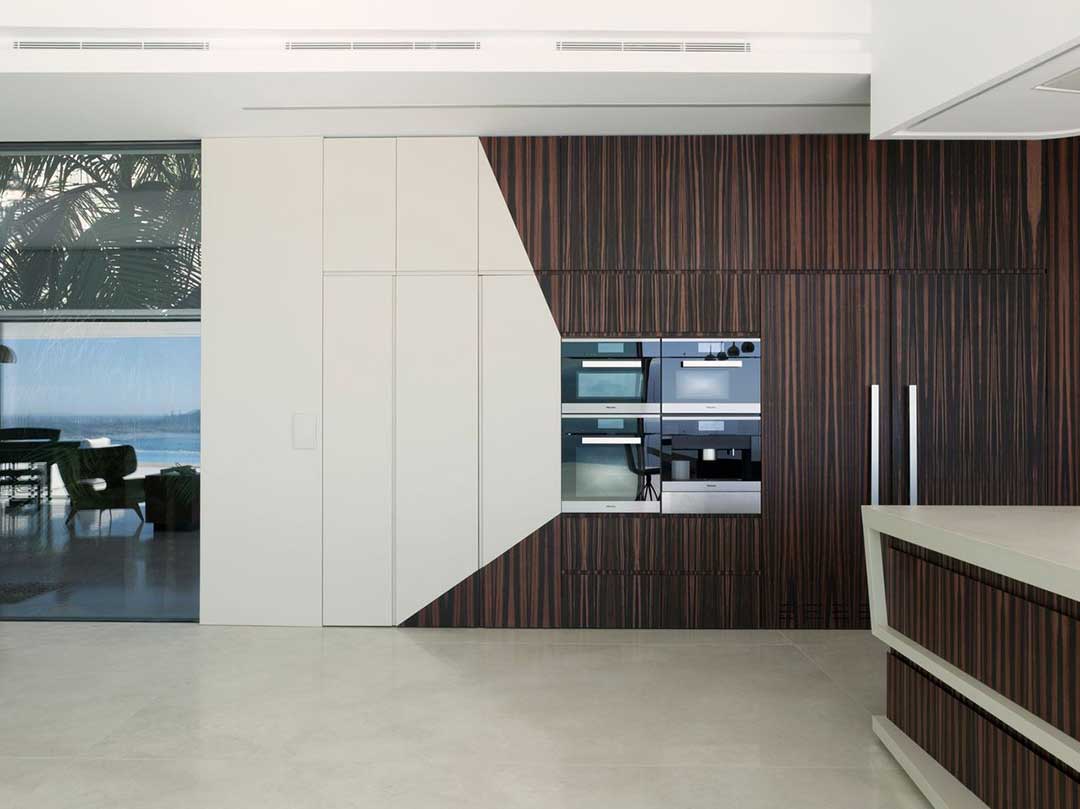 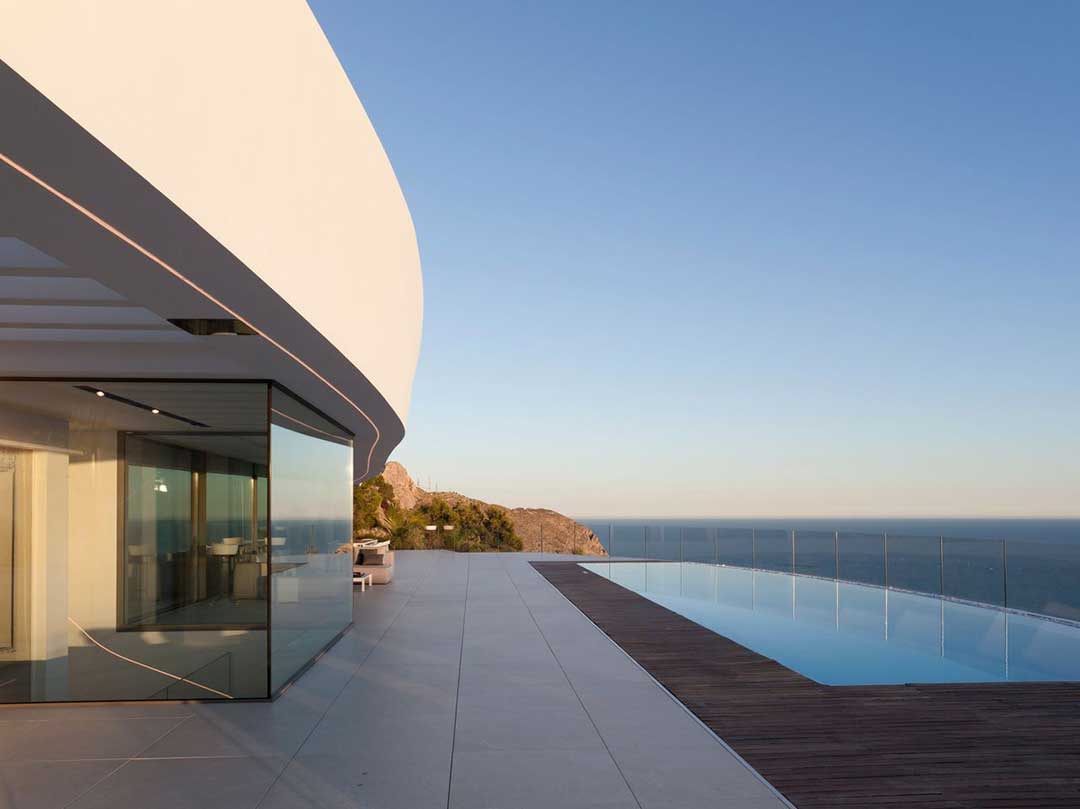 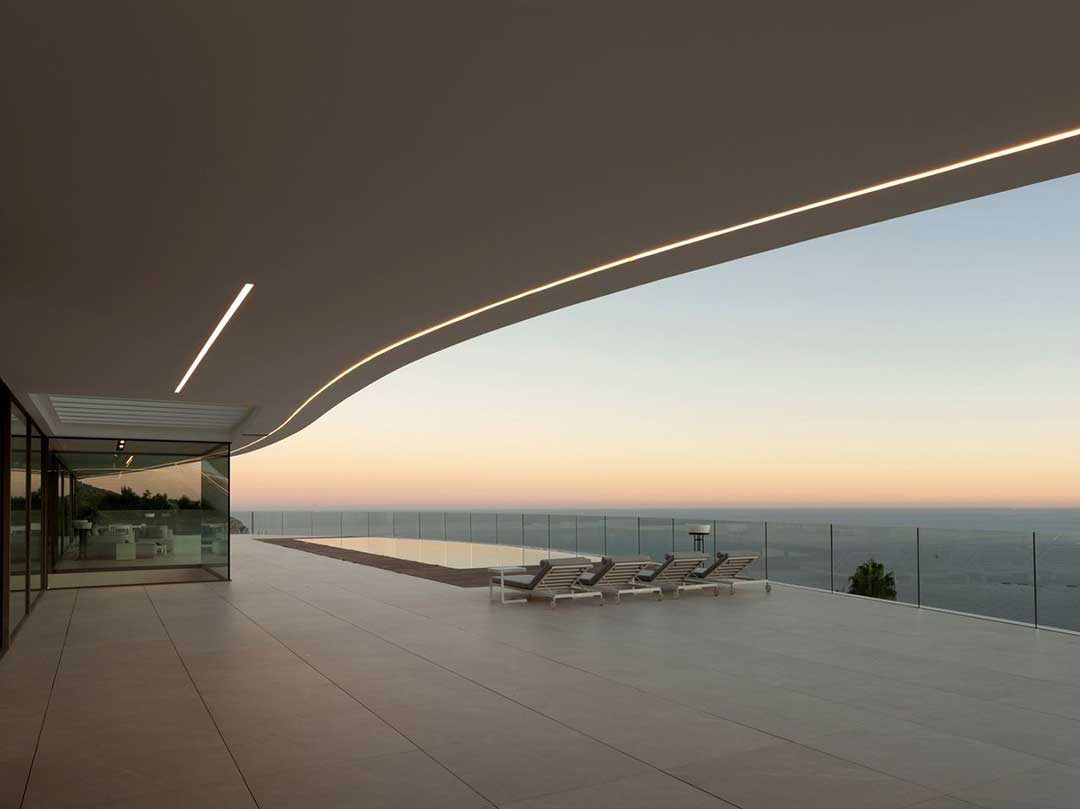 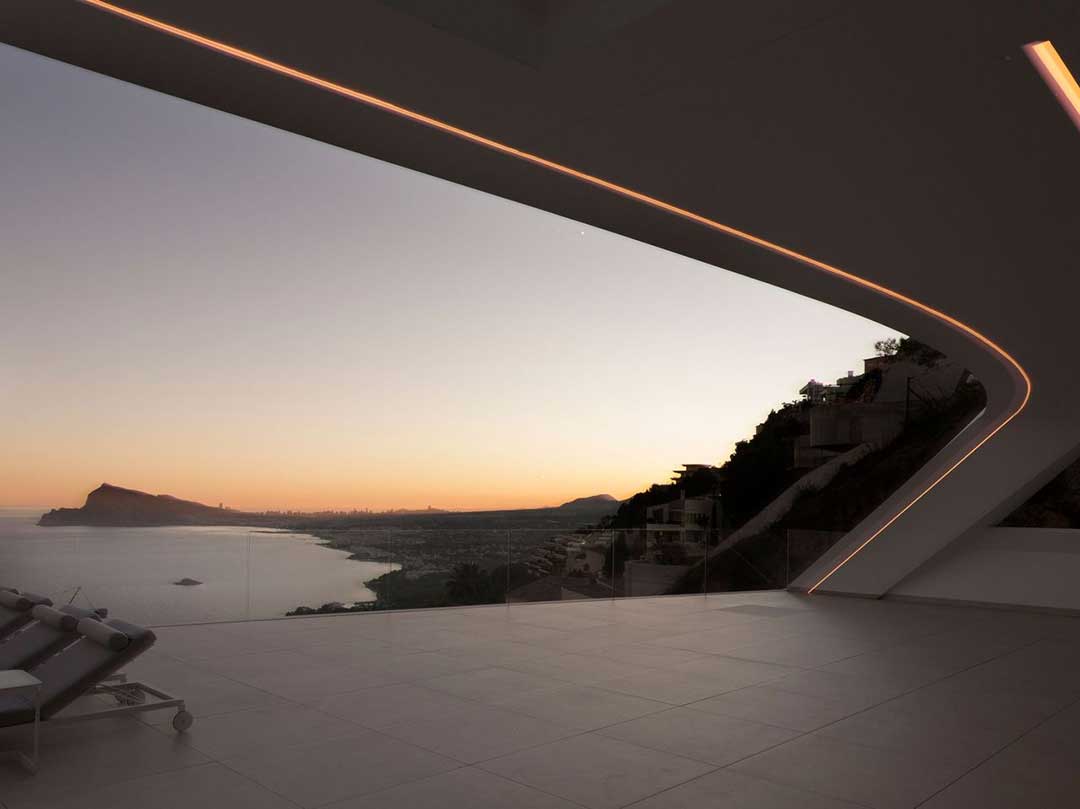 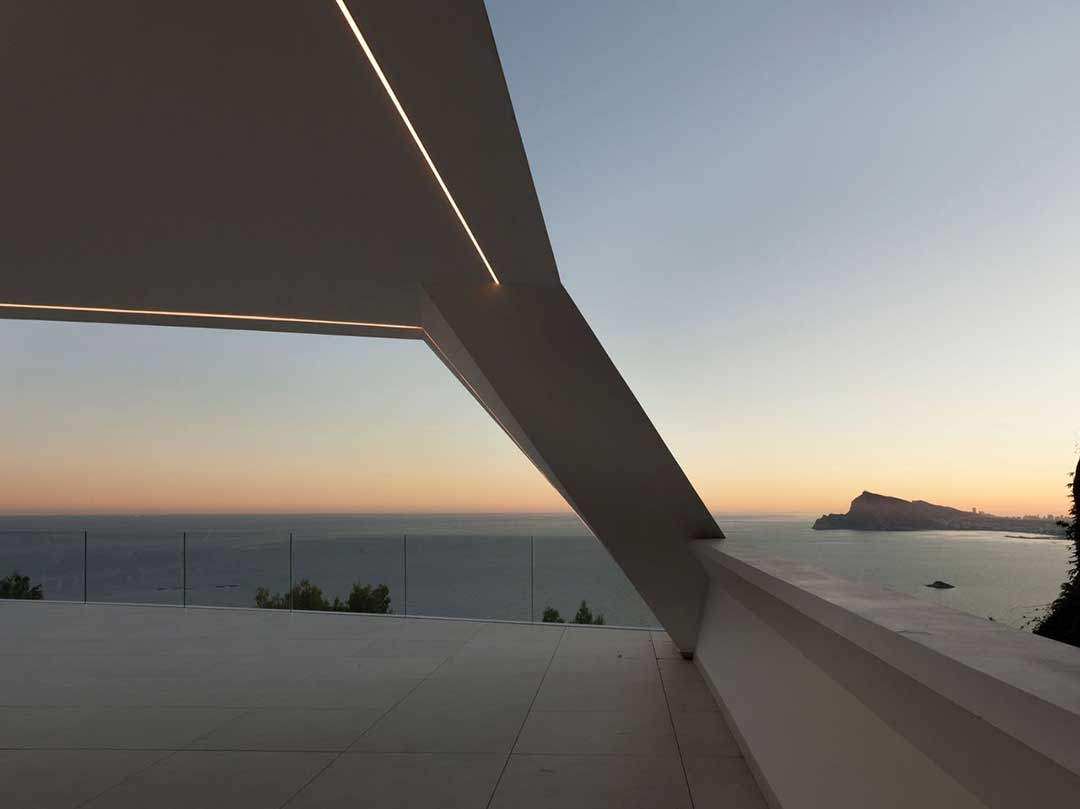 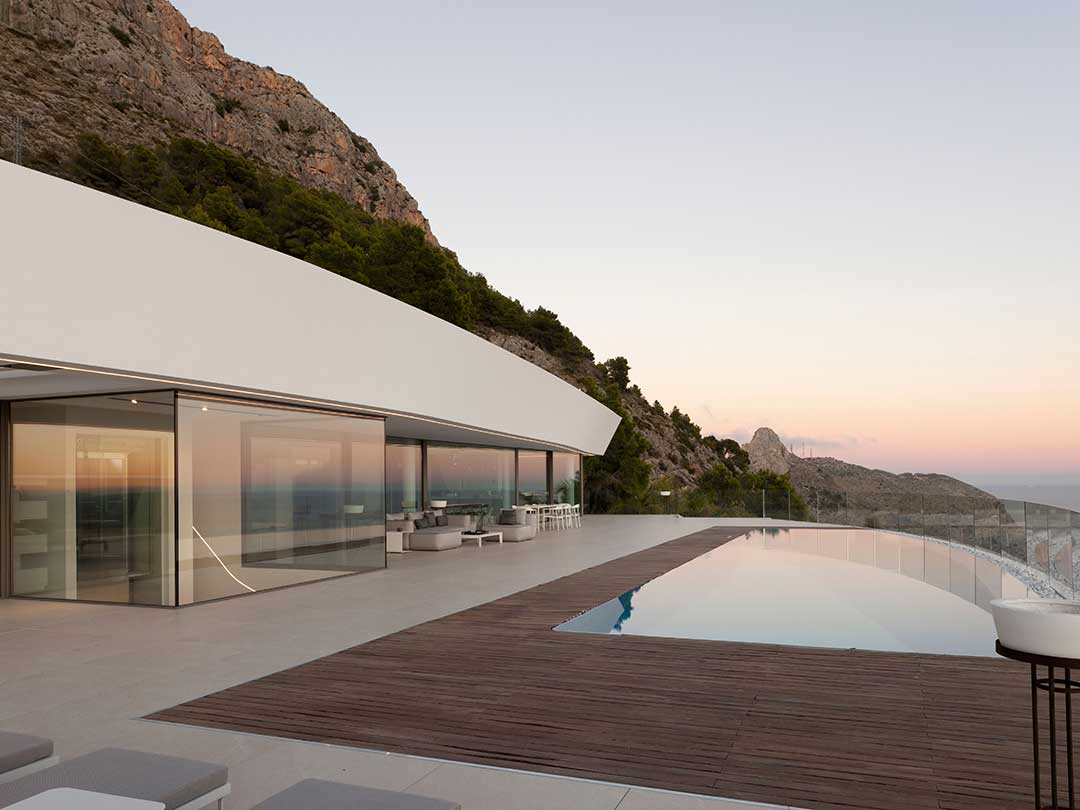 Such an obvious and important thing as being aware of how a construction is going to be perceived was the starting point of this project.

The plot, with a considerable has a 180 degree sea views, is located in the upper part of a development that is developed along the profile of a mountain. The access to the plot is through the main road of this urbanization, and the way to discover it is very particular, since it appears, literally, after a very closed curve, as if the plot was over you. That sensation, which was the first one we had, marked the idea that the house that was located there should accompany the way of discovering it, besides trying to avoid that it appeared as a robust and very massive element. This, together with the fact that the possible dimension of the house’s façade was close to 47 linear meters, all facing the sea, convinced us to treat the shape of the house in a very sinuous way, like a curve.

In fact, the 3 interior floors of the house, (the basement, which serves as access and garage along with other complementary uses, the first floor that houses the area of bedrooms of the daughters and guests, along with the gym and spa area, and the second floor, which contains the day room, pool and master bedroom), are perfectly rectangular, without any kind of form that can detract from the functionality of living spaces. On the other hand, the exterior covers are those that assume the role of breaking with the orthogonality, of conferring to the set the sinuosity and the dynamism that is looked for, this way to try to mimic the way of discovering the house and to subtract dramatism to its appearance. For this, a strategy is defined for the implementation of the house in the plot that achieves maximum integration into the mountain, working the section, so that basement and first floor appear in the same vertical, while the second floor (the main), is set back, so that its terrace and pool are developed on the roof of the first floor. This is achieved from the road circulation is not appreciated the main floor, being only visible the basement (and only partially and because it produces access to the house), and the first floor, which manages to subtract the effect of mass that was intended to avoid.

The shape of the house and the important flights of the terraces (the pool maintains a flight of 6 meters along most of its length of 21 meters), allows access to the house since you enter the plot becomes a gradual experience, both pedestrian and car, since it goes from being completely outside, to the house itself welcomes you and covers you with those flights, until you reach the main entrance of the house, consisting of a lobby at triple height.

Therefore, the exterior materiality was chosen for a continuous multilayer coating in white, in line with the Mediterranean tradition of the environment, and large glass panels with graphite carpentry, so that the reading was that of some important white curved slabs, which form the cantilevers, including the glass planes, so that the contrast between the two emphasize the effect of the flights and the search for lightness

Regarding the interior materiality, for all the wooden elements, we tried to follow the same design concept as for the house, based on the curved lines. In order to make this clear, we chose to combine white lacquered wood pieces with other natural wood pieces whose veins were really dynamic. Doors, closets and panelling, as well as the kitchen, follow this concept, with designs that are unique. In addition to wood, for other paneling, large format porcelain pieces are used, as is the case of the exteriors of the bathrooms, which helps to understand them as independent boxes within the spaces of the rooms. A special mention should be made of the most playful space in the house, dedicated to the spa and gymnasium, where another large-format porcelain tile, imitating calacatta marble, is the main protagonist.

The pavements are in large format, leaning in the election by a neutral color, but simultaneously that denoted certain warmth.

All in all, the lighting tries to follow the concepts of linearity, dynamism and movement, becoming even in some places like the hall, in an element capable of joining different spaces. On the outside, it is used to completely mark the shape of the house, to understand the curved house.